Get Your Tactics Ready for the Ebola Market Event

My sources tell me that Ebola is probably the most serious threat to humanity since the Bubonic Plague of the Middle Ages. Already it has spread to a dozen countries, including the U.S., and more than 4,000 people are dead. According to Dr. Bruce Aylward of the World Health Organization (WHO), mortality rates are rising and now sit at 70%.

This outbreak is more grim proof that Trend No. 6 – War, Terrorism, and Ugliness – is indeed a growth industry.

That’s the next trend we’ll be discussing, though it’s easily my least favorite both personally and professionally. But it’s very, very important. So please stay tuned for that in the weeks ahead.

In the meantime, Ebola has the potential to be a serious market event before it’s brought under control. So we need to talk about it logically – no hype, no conspiracies, and no nonsense. I mention those things because they’re all emotional inputs that can cloud your thinking and have a seriously negative impact on your money.

Here are the tactics you need on hand for the Ebola market event.

Ebola and the Air Traffic Industry

Air traffic is the main component to Ebola’s spread, as the report from the Laboratory for Modeling of Biological and Socio-Technical Systems at Northeastern University makes clear. According to Prof. Alex Vespignani, as reported by Reuters, the risks “change every day the epidemic continues.”

Other experts like Dr. C.J. Peters and virologists of the CDC and the U.S. Army’s Medical Research and Development Command are cautioning that Ebola could mutate and become transmissible through the air.

While there have been some politicians calling for bans on flights coming out of West Africa, these seem unlikely to be enacted. The White House, the WHO, and other groups have made it clear that they view the idea of cutting off the three countries in which Ebola runs rampant as not just politically unfeasible, but also impractical as a tool to fight the spread of Ebola.

Key Takeaways to Protect Your Wealth from Ebola

Here are three key tactics that will help you stay in the game and in pursuit of the longer-term profits we know are out there.

1) Make sure your trailing stops are in place. I recommend using these across the board to ensure that your money is protected against catastrophic loss.

2) Cover your downside with investment choices that will profit in a fall. Shorting UAL is one way to hedge the short-term potential associated with a single company in a single industry. But to hedge your whole portfolio, I like a specialized inverse fund called the Rydex Inverse S&P 500 Strategy – Investor Class (RYURX) that rises as the S&P 500 falls. Studies show that having between 3% and 5% of investable assets not only takes the sting out any short term market drop, but helps reduce overall portfolio volatility so you can remain focused on opportunity rather than fear.

3) Be ready to buy. Every short-term market event ultimately passes. Ebola will, too. When the corner turns, you’ll want to cover your bases and load up. It will be tough if the disease really creates panic, but absolutely the right thing to do for your financial success.

Yet, there’s nothing officials can do about people’s personal inclinations.

I’ve personally cancelled several travel plans in the wake of Ebola’s rise, and many millions of other would-be customers for the airlines are undoubtedly considering doing the same.

This bodes very badly for the airlines in general, but especially for the big global carriers like United Continental Holdings Inc. (NYSE:UAL). The stock has already sagged since the first U.S. infection was announced, and it’s entirely logical to expect that it will decline further against the backdrop of the (sadly) very real possibility of future infections in the U.S. – especially if they involve more airline passengers.

Consider what happened to the industry the last time a contagion threatened the U.S.

In February 2009, as the stock market was emerging from the worst haircut in recent memory, UAL was still trading at the $5.00 to $6.00 range. But as other stocks rose from the recession’s abyss, UAL had some room to fall as the H1N1 virus (swine flu) became a cause for national concern.

A disease that caused nothing worse than a fever in the vast majority of its victims would nonetheless kill up to 203,000 people according to researchers writing in PLOS Medicine – a figure 20x higher than WHO lab-confirmed cases by the time it ran its course.

Like all contagions, it wreaked havoc in the airline industry. UAL reached its 2009 low not in March but at the end of June when it sank to $3.17 per share – a 53% drop-off for a stock that had already felt the lash of recession as painfully as any company. 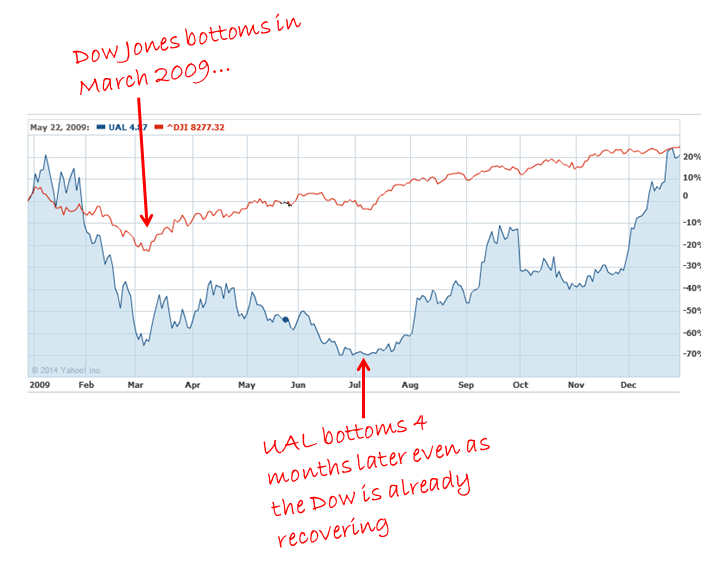 Of course, H1N1 and Ebola aren’t the same thing. Ebola is far more deadly – which makes it a more serious threat to the airline industry, in addition to humanity itself.

Honestly, if there’s ever a time when I hope my analysis is wrong, this is it. I hope with all my heart that this situation is contained quickly and thoroughly.

But I worry that the damage to the airline industry is already done.

Even in a best-case scenario, the dozens of people potentially exposed to the virus so far will be watched like hawks under quarantine for a few more weeks, show no symptoms, and be free to go – potentially carriers of not only the virus but the law of unintended consequences.

How to Turn UAL’s Woes into Profits

We already talked about how buying put options can produce gains when prices for the underlying stocks or indexes fall. There are also a wide variety of exchange-traded funds (ETFs) designed to go up in value when the market or specific sectors drop – in some cases, by two or three times as much.

However, the purest means of profiting from a downward move in the market or an individual stock is by selling short. It’s aggressive and it’s not for everybody because it can take nerves of steel to bet on failure when the nature human instinct is to bet on success.

In simplest terms, when you sell a stock short, you borrow the shares from your broker, sell them at the current market price, and then hope to score a profit by buying them back at a lower price once the stock drops. At that point, you return the shares to the broker, keeping the difference as profit (minus a small margin fee).

This is a powerful short-term strategy, especially in uncertain times.

Of course, you can’t short just any old stock and expect to profit. The key is to find overvalued issues and sell them when the market turns down. That way you’ll have momentum on your side yet still have the ability to remain fully invested, getting the maximum bang for your buck.

However, you don’t ever want to bet against a stock solely because it’s expensive, or even overvalued.

Instead, you always want to find some other compelling reason for potential failure or a lower valuation – like Ebola’s potential impact on the airline industry and its major carriers like United.

You also have to be careful and spread your risk – much as you would with long positions. I suggest putting no more than 2.5% of your assets in any single short position. Long or short, you never want to bet the proverbial farm on any trade – ever.

So, if you believe like I do that Ebola has the potential to ground earnings, consider shorting United Continental Holdings Inc. (NYSE:UAL) at market, with plans to cover the trade if UAL rises by more than 10% from your entry point. More sophisticated investors may wish to consider buying put options as an alternative.

If you find it unthinkable to profit from Ebola, I understand. But recognize that from chaos comes opportunity, an investment maxim I’ve learned to live by in the pursuit of wealth protection and profits.