The One Investing Tactic You Should NEVER Use

My mission and vision with Total Wealth is to help you uncover tremendous wealth-building opportunities through our six unstoppable trends, maximize your profits with the best trading tactics, and (perhaps most importantly) protect what you have.

Today I want to keep that promise by talking about tactics.

Many investors think they have this covered but, in reality, the savviest investors are always on the hunt to learn new tactics in the pursuit of profits. Like a chef who discovers new ingredients, they are constantly improving the “recipes” they use for success.

Before we start, though, I need you to make me a promise: that you will NEVER use this one trading tactic we’re going to talk about today.

Ironically, this is one tactic that comes naturally to all of us and a mainstay investment principle used by 99% of the population.

But it undercuts everything else you do as an investor.

Here’s the one tactic you can’t use…

I’ll be right up front. What I’m about to say may make you uncomfortable. Believe me, I get it. I’m hesitant to bring this up because it could easily be taken out of context.

But I will anyway for one simple reason – because if you understand the implications of what Wall Street doesn’t say about this tactic, then you can better interpret what it does say and, more importantly, use that information to create bigger profits. And you will never hear this from Wall Street or your broker… because it’s not in their interest to share it with you.

Back in 2006 I came across a study in Psychological Science that was as profound as it was politically incorrect, at least on the surface, anyway.

The implications are pretty striking so you’d think Wall Street would be all over it but, sadly, they’re not. (Given that they’re out for their own interests, that’s no real surprise.) I’ve only seen it mentioned once in the years since, by Ric Edelman, CEO of Edelman Financial.

Here’s what it says.

Researchers at three major universities – Stanford, Carnegie Mellon and the University of Iowa – published findings showing that brain-damaged individuals made better investment decisions than the rest of us.

To be precise, what they studied was the impact of injuries that prevented the brains of the injured from processing emotional stimuli and, by implication, responses to those specific inputs.

Researchers found that when they compared the findings to folks with no brain damage, the “injured” individuals made significantly better investment decisions.

That’s because the human brain is wired to evaluate economic and investing information using connections and pathways that are closely linked to emotional inputs. You’d think this kind of decision making would involve logical brain pathways but that’s not true.

This is why making decisions with your money can be very challenging, especially when the markets are complicated and the investing landscape emotionally charged like it is right now. Because you are taking what should be a logical decision and using emotional receptors to make it.

It’s also why Wall Street wants you to believe money is complicated and why their ads are so slick. Unlike the average individual investor, the Big Boys have spent billions understanding what makes your mind work and how specific inputs prompt specific actions on your part – chief among which is commission-generating buying and selling activity that’s worth $18 billion or more a year to the top 25 firms.

They know that if you’re happy, then you’re generally going to be a buyer, and that if you’re sad or fearful, you’ll be a seller. And usually at precisely the wrong time, I might add.

The result is tremendous underperformance that gets dramatically worse over time.

The latest DALBAR data shows that the average investor earned only 5.02% yearly over 20 years versus the S&P 500 which turned in an average 9.22% annually over the same time frame.

Now you may be tempted to dismiss this result as being abnormal, because of the financial crisis, but it’s not. Investors who fall prey to emotional decision-making fell far behind, even during one of the biggest bull markets in recorded history off the March 2009 lows. 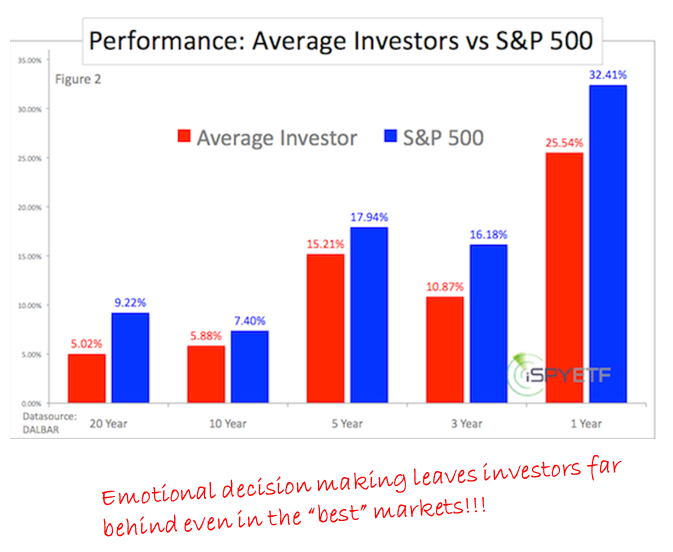 Again, this is an uncomfortable subject for a lot of investors.

Many of my own subscribers thought I’d lost my marbles when I told them in 2007 to batten down the hatches at a time when they wanted to chase performance. On the way down, those who followed along with my recommendations had the opportunity to enjoy returns like the 101.68% and we captured in iShares MSCI Brazil Capped (NYSEArca:EWZ) and 83.33% from iShares China Large-Cap (NYSEArca:FXI) respectively.

The same thing happened in March 2009 when I told them that it was time to buy. On the way up, those same subscribers had the opportunity to capture a slew of double- and triple-digit winners like CNH Industrial NV (NYSE:CNHI), Navios Maritime Holdings Inc. (NYSE:NM), and ABB Ltd. (NYSE:ABB) which we closed out at 104.43%, 104.05%, and 103.12% in three trades, respectively.

So how do you do the same thing?

Three Ways to Remove Emotion from the Equation

Success comes down to removing emotion from the equation… actually, in much the same way injuries removed the emotional processing from individuals in the research I just told you about.

Most online platforms have stops built in. So there’s no excuse for not using them.

To be fair, the common complaint I get on trailing stops is that they force you to sell when you may not want to. I hear ya, which is why I’d like to point out that you can use options or inverse funds to accomplish the same thing.

We’ll go over all these tactics in more detail in the weeks ahead.

For now, just remember, the more “sophisticated” you get, the higher the risk of emotional decision-making. And that’s not the goal.

Simplicity, security, and the tactics needed to harvest big profits – that’s the goal.

27 Responses to The One Investing Tactic You Should NEVER Use