The latest research from DALBAR is very graphic…

Over the past 20 years, individual investors averaged a measly 2.53% a year, versus the S&P 500, which chalked up 9.02%. In other words, your average annual return was 6.49% less than what it could have been each year. Ouch. 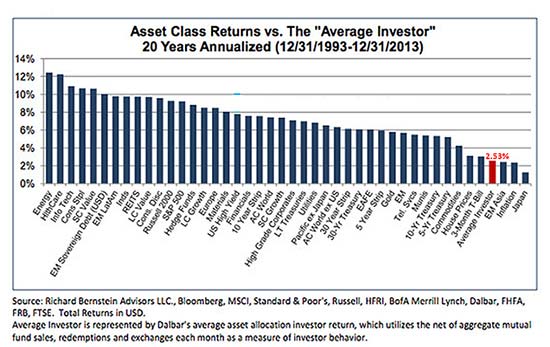 So what’s going on?

When you look back over the last two decades, two things are readily apparent – a) that the markets have been rocky and b) that there’s plenty of blame to go around. The Fed, the big banks, bubbles, China, Washington, Wall Street, the ECB… it doesn’t matter. At some level, they’re all guilty.

But you know what? Those two factors are actually NOT the primary causes that doom millions of investors to poor performance.

THIS is the real culprit…

Turns out that every investor is hardwired to do three things that kill returns.

And that’s what I want to talk about today – these “bad investing habits” – for one simple reason. If you understand what these costly behaviors are, recognize them in yourself, and learn how to eliminate them, then you can build wealth much more quickly.

And you can absolutely beat the market.

It’s a Total Wealth tactic that ranks right up there will picking the right stocks and controlling risk.

So let’s get cracking…

Recency bias is the scientific term for when short-term focus trumps long-term planning and execution.

It’s what happens when somebody yells “fire” and everybody runs for the same exit at once, despite having entered through any of half a dozen doors in the auditorium.

This is why momentum trading works, for example, or why the news channels seem to cover the same stocks at nearly the same time – because a huge number of people are focused on exactly the same companies simultaneously. Logically, they then become the subject of increased attention and tend to move more strongly or consistently.

The question of “why” is the subject of much debate among human behaviorists, but I chalk it up to the fact that human memories tend to focus on recent events more emotionally than they do longer-term plans that are put together with almost clinical detachment.

And the more extreme the events or the news, the sharper our short-term focus becomes.

This is why emotion is the one investing tactic you should never use. It undercuts absolutely everything you do as an investor.

Dr. John Casti, a world-recognized expert on the science of complexity and the author of Mood Matters, says “bombshell events are assimilated almost immediately into the prevailing [social] mood,” whereas longer-term cycles bear almost no witness to gradual change.

If that doesn’t make sense, think about what happened on 9/11. Most of the world’s major markets bottomed within minutes of each other on short-term panic and emotion. Then, when trading resumed days later, they began to climb almost in sync as highly localized events once again faded into the longer-term fabric of our world.

And that brings me to herding.

Bad Investing Habit No. 2: Running with the Herd

Humans would rather be wrong in a group than right individually. So the vast majority of investors tend to make decisions, and mistakes, together en masse.

You can see that in market data suggesting we have a fine tradition of doing exactly the right thing at precisely the wrong time. Instead of buying low and selling high, most investors tend to sell low and buy high, further damning themselves to subpar returns.

A lot of studies suggest this is the case, but none is as interesting as that by Philip Z. Maymin, an assistant professor of finance and risk engineering at Polytechnic Institute of New York University.

Prof. Maymin scrutinized records kept by the investment firm Gerstein Fisher from 1993 to mid-2010. His work included analysis on more than 1.5 million interactions between the firm and its clients. And he made a staggering finding. The value of investment advisors is not so much in picking stocks but in keeping clients from impulsively trading at the wrong time. Maymin found that aggressive orders cost clients about 4% a year.

In other words, investors act against their own best economic interests with alarming regularity and cost themselves huge amounts of wealth in the process.

Back to complexity expert Dr. Casti… He says this is because society tends to form social groups based on affinity rather than simply becoming a collection of isolated individuals. That’s why investors tend to magnify the importance of information you see in the herd around you rather than breaking from it before it goes over the cliff.

When it comes to money, we see this in a phenomenon known as “chasing returns” or following the hot money. This is why annual performance issues like those published in Forbes, Money Magazine, or Kiplinger’s, for example, are so irresistible. And so dangerous.

That brings me to fear.

Bad Investing Habit No. 3: Letting Fear Move You (or Paralyze You)

Right now millions of investors are sitting on the sidelines completely paralyzed by plain old-fashioned fear. And who can blame them? These markets have been some of the most vicious in recorded history.

Yet I would argue that fear actually contributes to both recency and herding. That’s because it causes people to sit on cash that should be invested or keep money in the game when it should be taken to the sidelines.

Clearly, bad habits work together to keep you from the returns you deserve.

Studies show that this comes down to pain. Losses hurt. They hurt financially and they hurt emotionally. Nobody likes them.

That’s why people are more likely to let a losing position go against them than they are to take profits – because they can’t take the “pain” of being wrong. The fact that they are unprofitable becomes almost irrelevant.

I can attest to that, having helped hundreds of thousands of investors over the years navigate today’s complicated markets through my columns, presentations, and seminars worldwide.

That’s why I do everything I can to enforce the discipline of taking profits and minimizing losses in careful concert with an overall plan. It’s why both Tactics and Risk Management are an integral part of the Total Wealth process.

By breaking the recency factor and eliminating the herding mentality that went with it, I find that many times fear is no longer an issue.

So how do you break the habits that you didn’t know you had?

I’m glad you asked… I’ll be back in a few days to show you.

As usual, we’re going to keep it simple.

13 Responses to Three Bad Investing Habits to Dump in 2015