The Only Way McDonald’s New CEO Can Turn Things Around

Just over two months ago I unceremoniously kicked McDonald’s Corp. (NYSE:MCD) off my “buy” list noting that for the first time in more than 10 years that the company was no longer tapped into any of our globally “unstoppable trends.” Now, with the stock down another 7% since then, the Board has just kicked CEO Don Thompson off the menu, too.

Is this move enough to put Mickey D’s back on my list?

That’s a great question. It’s not for nothing that the stock is practically investment royalty. It’s established, it’s widely held, and it returned $6.4 billion to shareholders last year.

It’s also a logical question because a change in senior management can be a powerful catalyst for higher returns. ABB, for example, took off on a 1.359% run in the five years after Jurgen Dormann took over for former CEO Joergen Centerman. Similarly, Yahoo! Inc. has returned more than 190% since former Google exec Marissa Mayer took the reins and launched a series of bold acquisitions in the summer of 2012. 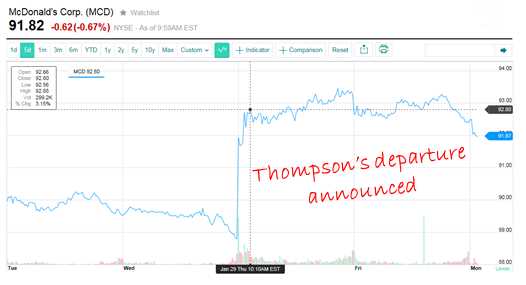 McDonald’s stock jumped 5% the day Thompson hit the pavement after a 25-year career and less than two years as CEO, so investors are naturally giving the stock a second look. They’re all wondering – “Is this the day McDonald’s turns things around?”

My answer may surprise you.

While many investors like to think CEOs have long tenure, in fact they come and go on a regular basis. In 2014 alone, 1,341 CEOs left their companies, a figure up 7% from 2013’s total according to a report by The Street.

That’s because not everything a CEO does is good. Many times new CEOs can destroy a company literally and figuratively.

RadioShack, for example, has fallen more than 91% since it named Joseph Magnacca to the corner office. CEO Ron Johnson was fired from JC Penney after just 17 months on the job following a disastrous reinvention of the company’s brand. The stock was down by 25% in Johnson’s first year at the helm.

The numbers – never mind the personalities involved here – are terrible.

McDonald’s last earnings report, released not even two weeks ago, is confirmation that 2014 was one of the company’s worst years ever. Consolidated operating income decreased by 9% for the year, due mostly to supply issues in the Asia/Pacific and Middle Eastern regions.

Diluted earnings per share were down by 13%. Global comparable sales decreased by 1% for the year. This 1% decrease is even more grim when you consider what drove it – a negative trend in guest traffic across every one of the chain’s major segments.

It doesn’t surprise me that a humbled Don Thompson acknowledged “meaningful headwinds” during the earnings conference call. Nor did the assurances that he was acting “with a sense of urgency” to turn the situation around.

The call was like buzzword bingo and I’ve seen this playbook before. You have, too.

Not even the $6.4 billion McDonald’s returned to shareholders in dividends and share repurchases was enough to assuage the board’s concern with McDonald’s direction and Thompson’s future. So out the door he went.

He’s got some serious chops. From 2011-2013, Easterbrook directed PizzaExpress, a British fast-food chain that successfully built a brand around the high quality and freshness of its food – an aura that McDonald’s would do very well to restore. I’ve eaten there lots and loved it.

He then became CEO of Wagamama, a Japanese noodle chain also based in London that tastes great and serves up super quality food at a reasonable price. That’s always important in hyper expensive London.

It’s not like he’s an unknown. In fact, the opposite is true. Before being tapped for CEO, McDonald’s snagged him to oversee its menus, marketing campaigns, and technology.

When I’m evaluating a company, this is exactly the kind of CEO I want to see. He’s got global expertise and a proven track record. There’s no doubt in my mind that Easterbrook can repair McDonald’s brand.

Still, it’s NOT enough for me to re-recommend the company. Not now.

For that, I’d have to see Easterbrook tap into at least one unstoppable trend but preferably two.

For years I recommended McDonald’s as a stock to buy despite naysayers who were turned off by the gradual declines in same-store sales. Critics pointed to MCD’s declining market share among fast-food consumers in the U.S. to justify their downgrading of the stock.

They all had a point, at least in the short term. McDonald’s sagging sales were troubling, but even last summer I still recommended the stock. I was heartened by one development I saw in Asia that outweighed every temporary setback. It was confirmation to me that MCD was making moves that could assure its success for years to come.

The effort in China made perfect sense to me because of the incredible promise that China’s exploding middle class represents to the company. A 2012 McKinsey & Co. report found that China’s middle class is expected to grow by 800% from 2010-2020, eventually numbering 50% of China’s 1.3 billion populace.

With growth like this, revenue from China could eventually dwarf revenue from the U.S., which, being home to 40% of McDonald’s stores is currently the bedrock of McDonald’s sales. This development – the harnessing of China’s amazing Demographics trend, would be an earthquake for McDonald’s and completely turn around the recent history of declining global sales. Such is the power of an “Unstoppable Trend.”

However, the company got sloppy and was unfortunately took its eye off suppliers that are critical to its success – in this case, a Shanghai meatpacking operation. The tainted meat scandal in 2014 resulted in scandalous headlines for McDonald’s, as well as sanctions and a huge loss of customer goodwill. That’s a much bigger deal in reputation conscious China than it is here. Anyway, long story short, the fallout allowed smaller, nimble companies to gobble up market share – pun absolutely intended.

Hopefully, Mr. Easterbrook will signal early on that he understands this, and continue McDonald’s aggressive eastward expansion by rebuilding trust. The momentum would go a long way towards making McDonald’s a stock to buy once more.

We’ve talked a good deal about the concept of Scarcity & Allocation with regard to the importance of focusing on “must haves” versus “nice to haves.” It’s a distinction 99% of all investors miss and, sadly, doom themselves to unnecessary risk as a result.

McDonald’s fit the bill nicely selling a narrowly defined menu of carefully selected goods selected as much for their taste as their appeal to hard working folks around the world.

Then, inexplicably, it went upscale and, in the process, became a nice to have company.

That’s why I was so puzzled and disappointed by MCD management’s decisions incrementally increase the prices on its menus, without upgrading quality or service in any significant way.

This move may seem inconsequential, but I believe it opens McDonald’s up to a potential death spiral as its increasingly cash-tight customers “allocate” their hard earned money to competitors. This will result in yet a deeper revenue crunch, still more price increases to make up margin, and yet more customer alienation.

If McDonald’s wants to hitch itself to the Scarcity/Allocation trend, the solution lies with its menu. Instead of trying to make its menu deluxe or boutique, it’s got to get back to the “value meal” that caused people in their millions to flock to McDonald’s in the first place.

When that happens, it will look a lot more like the “must-have” company we used to know and, by implication, be capable of bucking the “headwinds” Thompson described on his way out.

And, once again, it’ll be time to order up shares.