I’ve made no bones about my feelings when it comes to quantitative easing, or “QE” for short.

Plainly put, QE violates the very principles of capitalism – namely that there is success and failure- and it’s akin to monetary drunk driving. Rather than letting dead companies die, the Fed has created legions of financial zombies that will ultimately come back to bite everybody in the rear end.

Still, I’m glad to have the Fed’s meddling for one reason and one reason only – because learning to harness QE can be one of the most profitable Total Wealth Tactics of all.

Especially when it comes to finding companies like we did recently in our sister publication, the Money Map Report and right here in Total Wealth.

The first was a relatively unknown biotech firm that popped more than 50% in just eight short weeks while the latter was none other than the Williams Co Inc. (NYSE:WMB), which has returned a slightly lower but still impressive 41.9% since January.

Today I want to share two more companies with you that are poised for exactly the same sort of take-off under very similar circumstances.

You’ve got to act quickly, however. That’s because the window of opportunity will close with a thud when the first whiff of a rate hike hits.

Here’s how to profit from the Fed’s actions.

The Federal Reserve began buying bonds in October 2008 as part of a program known euphemistically as quantitative easing. Officially a monetary policy intended to stimulate the economy when conventional measures fail, it’s little more than an act of financial desperation.

Long story short, some $3.7 trillion later the Fed has done the impossible and inflated everything from the stock markets to houses. At once.

Legions of investors fought the Fed morally, intellectually, and philosophically by not investing and not spending money. Many still are, with good reason.

History shows very clearly that QE and the zero-interest rate policies that are intertwined with it ultimately fail. Instead of enriching the masses, they are little more than a “get rich quick” card for the uber-wealthy.

The real reason the Fed did what it did was to clear trillions in toxic debt from corporate balance sheets and those of the big banks that traded that schlock.

The Fed provided the “liquidity” you’ve heard so much about because its fancy economic models said that companies would use that money to borrow new debt cheaply, then subsequently invest in new productive capacity.

Only it never dawned on those in the halls of power that companies never behave like academic models, let alone the fancy ones used by the so-called smartest guys in the room. They’re in business to profit.

So what CEOs actually did is hardly surprising – they didn’t invest in productivity. They bought it.

The biggest corporations in America took all that “free” cash and used it to fuel a mergers and acquisitions bender that continues today, with a record $242 billion in deals inked last May alone.

According to KPMG’s 2015 M&A Report, some 44% of deal value hit the United States in a trend that’s expected to continue through the end of the year. 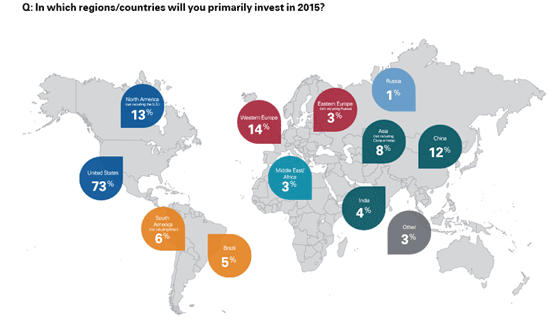 That’s logical. Buying growth is always cheaper and faster than creating it yourself.

And that’s your entry.

As long as there is a pile of cheap money available, stronger companies will buy weaker companies in a move that’s intended to make both stronger and create a whole lot more wealth for anybody playing along.

Any company that sports decent numbers is potentially a target, particularly if they’ve got an innovative breakthrough product, exclusive contracts, or some other defining feature that makes them attractive.

Here are two with great potential.

Rumors of pending acquisition deals have been swirling around this $22 billion biotech company ever since March, when a loose cannon analyst cited “top sources (and I mean top)” as confirmation that a buyout deal from Shire PLC was in the works.

However, as American humorist Mark Twain might have said, rumors of BioMarin’s buyout were highly exaggerated. The company presumably told whatever potential buyout suitors it engaged with for negotiations to go fishing.

Yet, in the months since, BioMarin’s drugs and treatments have passed various stages of the FDA review process that only increase its attractiveness.

Two of the most exciting developments are the FDA’s acceptance of its filing of drisaspersen, a drug designed to treat muscular dystrophy, and positive findings for its Phase 2 trials of its experimental injectable drug for achondroplasia, a disorder colloquially known as “dwarfism.”

BMRN tends to develop treatments targeted at rare but severe disorders and afflictions, so there’s a pent-up and guaranteed demand for its treatments.

Naturally the biotech giants would love to acquire this innovative team – which is why companies like Shire PLC are willing to offer buyout prices based on projections that BMRN will triple its value in the next year.

Best of all, CEO Rob Eyler over the Marin Economic Forum, noted that no one will be shocked if they’re a buyout in the next few months… except, I think, possibly anybody who doesn’t own shares.

Last January CNBC’s Kate Kelly asked me if I was worried about smaller players in the energy sector “just plain going out of business.”

I replied that not only was I not afraid of the weaker players folding and being absorbed by stronger players, I was counting on it.

As you might imagine, that raised more than a few eyebrows at a time when oil had fallen 51% to only $52/barrel at the time. When it came to energy companies, it seemed investors couldn’t hit the sell button fast enough.

But I had studied my history carefully and knew something too many observers had forgotten – the strong always survive.

Speaking of which, that brings me to my second buyout target: Cabot Oil & Gas Corp. (NYSE:COG)

The company shows every sign of growing more efficient on the surface. It reported $264.5 million in cash flow from operations in Q1/2015, compared to $255.4 million in Q1/2014. That seems formidable, given the collapse in oil prices between the two quarters.

But discretionary cash flow – the amount of money left over after every possible capital project that could benefit the company’s bottom line is attended to – shrank more than 33%. That’s a sign that the company is exhausting its ability to expand in the tough times and may be prepared to do the next best thing – fold up and surrender to a company that’s still thriving.

I think it’s a great acquisition target when you consider that it’s got 5.4 trillion cubic feet of proved reserves in natural gas. And, thanks to a dip in market cap of more than 10% over the past three weeks, I’ve got to believe bigger players are circling.

So fight the Fed if you want.

I’d rather hunt down the profits it’s making possible.