Conventional wisdom at the moment says that China’s coming unglued and that the country’s stock markets pose a grave danger to global investors. It’s communist, it’s a Ponzi scheme, it’s ruled by insiders, it’s leveraged up to its eyeballs, ghost cities… all the usual tired old arguments are being rolled out as if they’re somehow new again.

In reality, the real risk isn’t being reported. In fact, it’s not even being talked about.

I want to focus on this disconnect today, because the China-bashing crowd is right about one thing – that country’s current challenges definitely affect your money.

Just not the way most people think.

Here’s what you need to know about China to properly (and profitably) position your portfolio.

The Great Fall of China … or the End of the Bling Dynasty?

The ongoing media narrative about China is as brutal as it gets, with legions of talking heads and mainstream pundits whipping up story after story about how the world’s second-largest economy is coming unglued.

For example, author and China expert Gordon Chang, best known for his 2001 book The Coming Collapse of China, noted on CNN recently that “China could be in the world’s greatest depression and they would still report 7%.” He’s alluding to the fact that “everybody” knows Chinese economic data is manipulated.

The implication, of course, is that ours isn’t, which is a lesson in irony if I’ve ever seen one considering what our government’s done to everything from employment figures to manufacturing input.

Meanwhile, well-known China bears like Jim Chanos have returned anew with cataclysmic warnings about why the Chinese market meltdown will mean the end of the financial universe as we know it. “Whatever you might think, it’s worse,” he told CNBC’s Fast Money last August.

Never mind that he’s an avowed short seller – and a good one at that – or the fact that people have been saying exactly the same thing about U.S. markets since March 2009, right before the S&P 500 took off on a generational 186% run.

A little perspective is clearly in order.

First, if China’s market were really the global colossus the media’s made it out to be, you can bet that our markets would have taken that into account years ago and shifted to the Far East accordingly.

But they didn’t, and they won’t for a long time to come.

Look at the following map, which depicts national boundaries commensurate with stock market size. It pretty much tells the story: 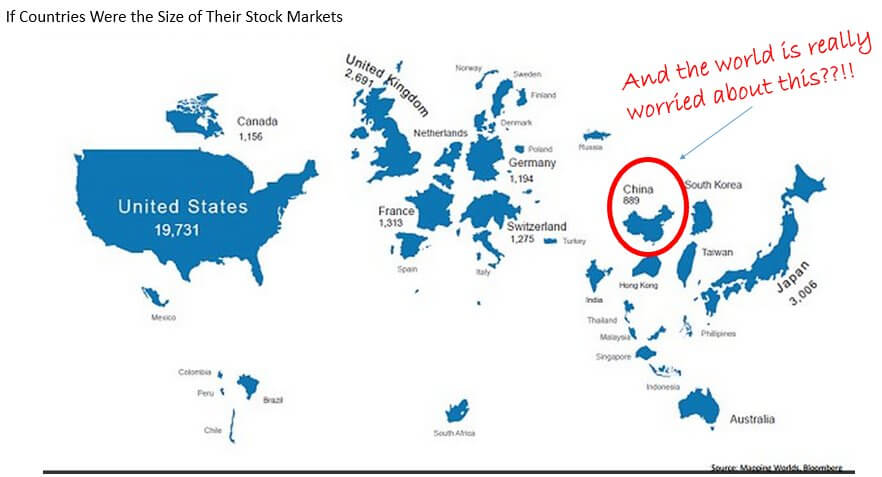 “But… but… they’re really volatile,” goes the thinking. The argument states that investors have no business setting their sights on the Red Dragon because our own markets are more stable.

Uh huh… on the heels of the wild 1000+ point drop in the Dow seen on August 24 and the following Wednesday’s 619-point rocket ride higher, ask yourself if you really believe that. I don’t.

No doubt Chinese stock markets can give investors a roller-coaster ride. In fact, they’re the most volatile on the planet at the moment, exceeding even Greece.

But here’s the thing: Chinese markets were still 30% less volatile than the maximum volatility achieved in the world’s six major market crashes since 1929, according to Bloomberg:

Let me break this down another way.

The Chinese stock market meltdown that supposedly is so critical to U.S. markets is a drop in the bucket compared to the 78% implosion when the Dot.bomb bubble burst here in 2000 and the 84% shellacking in Russia after that country defaulted in 1998.

Keep in mind that the U.S. economy has absorbed far bigger shock waves from overseas economic implosions before. It will again.

China’s Bureaucracy Could Be Your Best Buffer Against Market Turmoil

With the exception of the Nasdaq collapse in 2000, every other major crash in the chart I’ve just shared with you was caused by a breakdown that was either banking or debt-related. China’s stock market “disaster” is merely an internal adjustment that’s bringing prices back down from nosebleed levels. Keep in mind, between June 2014 and June 2015, China’s Shanghai Composite Index rose by 150%.

That, too, is normal for China, where individual investors having little or no experience investing account for an estimated 70% of all stock market transactions. Some 67% of the tens of millions of investors there have less than a high school education, according to a survey reported by The Guardian. So, like our markets at the beginning of the last century, they’re totally ill-equipped to handle the ups and downs that western investors take for granted as a fundamental part of capitalism. But they will anyway, as part of the inevitable maturation process that all capital markets undergo over time.

Further, Chinese A-shares – meaning those traded on mainland exchanges – are largely blocked from foreign investors. That means Chinese investors can bid them up to their hearts’ content almost in complete isolation and without the institutional selling that would otherwise balance that out.

Things are so bad that investing has quite literally become a spectator sport, with tens of thousands of brokerage houses in cities all over China providing theater-like seating so customers can chart the rise and fall of their investments.

I’ve been to more than a few of them over the years and you’d be hard pressed not to think you were in Vegas at the craps tables because of the way emotions flow through the crowd.

This picture, for example, shows a brokerage house in Beijing on a good day. All the red you see actually means that the Chinese markets were having a great day. The few green lines are actually stocks headed lower. (In China, red is up and green is down.) 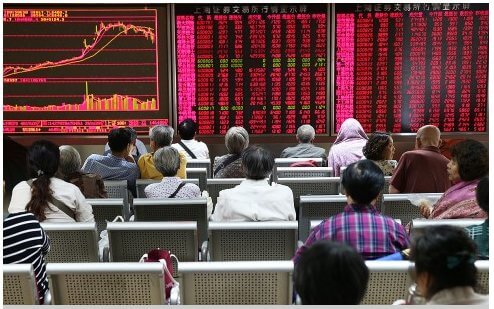 Here in the U.S. roughly 70% of trading volume is generated by institutions. That gives our markets a pronounced stability that most investors either take for granted or have never thought about before. Further, U.S. markets are open to millions of participants around the world, resulting in a constant stream of buying and selling rather than unidirectional, manic buying or selling.

And finally, many Chinese bears are concerned that money will flee China and suck the lifeblood out of the world’s global growth engine. This isn’t really the big deal they make it out to be either.

According to the World Bank, only 7% of Chinese households have invested in Chinese markets, allocating an average of 9% of their wealth, according to Beijing. Either way, that implies that more than 90% of Chinese households haven’t invested in their country’s stock market… yet. To use a very American stock market expression, there’s still plenty of money on the sidelines.

In reality, money leaving China would be great for one simple reason – because the vast majority of it would head straight for the most sophisticated and stable stock market on the planet, which is ours.

Pundits tend to wrongly equate the direction of a country’s markets with the trajectory of its GDP. That’s a loose correlation at best because the former is a financial instrument while the latter is an economic one. Even if growth has slowed from 7% to merely 4%, that’s not the disaster everybody thinks, especially when you consider how central banks in Europe, the United States, and Japan have spent trillions and have very little to show for their efforts.

The real risk here is something nobody’s talking about – that Beijing uses current market conditions as an excuse to slam down on the economic reforms that have gotten it this far.

If you think things have been wild now, imagine what happens if Beijing actually cuts off trade and reverts to Soviet-style communism rather than the capitalist version they’ve adopted.

So how do you build an investment strategy to prepare for this threat?

No doubt the situation in China is serious, but it’s all about psychology, not economic reality. That means you probably want to confine investments in China to very small slivers of your portfolio, just as you would any speculative investment.

Investing because of China is another matter entirely. That’s because China is the world’s last true growth market. It will remain volatile, but as such, also filled with opportunity.

Your best bets will be Western companies traded on Western exchanges tapped into the huge wealth creation. It’s not for nothing, for example, that Apple Inc. (NasdaqGS:AAPL) is focused on China. The same is true for The Coca-Cola Co. (NYSE:KO), Starbucks Corp. (NasdaqGS:SBUX), and Ford Motor Co. (NYSE:F). Even Molson Coors Brewing Co. (NYSE:TAP) announced a joint venture in China.

Of course, resource companies like BHP Billiton Ltd. (NYSE:BHP) and Freeport-McMoRan Inc. (NYSE:FCX) work, too. They’re major commodities players that will tap into the underlying production that quite literally makes China go. They’ve both been beaten down severely as China’s growth rate has slowed and Westerners have predictably panicked; yet, they’re ideally positioned to surge on an inevitable rebound for vital raw materials.

In closing, the real risk to China is one nobody’s talking about, at least not that I’m aware of.

So sit back and enjoy the entertainment as others squabble over what every squiggle in China’s markets may or may not mean. The louder the Chinese doomsayers become, the more likely they are to be wrong yet again.

Growth there may slow, but it won’t grind to a halt barring a complete policy reversal from Beijing… and that’s something 1.367 billion consumers will make sure never happens.