For the last 100 years, investing in America frequently meant doing a little research, and then calling your broker to buy. Armed with a modicum of knowledge and data, yesterday’s investors would often “set it and forget it” when it came to their financial future in a process euphemistically called “buy and hold.”

Problem is, “buy and hold” is a marketing gimmick – not an investment strategy. Buy and manage is the way you want to go in today’s complicated world, especially for the next six months.

As quaint as that may seem, it’s a vision of the future prompted by new technologies that make this possible. Take the new “crystal fuel,” for example. It’s being hailed by many experts as energy’s “Holy Grail” – a breakthrough fuel that’s 1,693x more powerful than gasoline. [More info]

I’ll get to those in a minute.

First, though, let’s talk about the elephant in the room.

The single biggest question at hand is whether or not the markets can continue to rise into 2018 on nothing more than the promise of President Trump’s tax cuts, infrastructure spending, and other legal reforms intended to spur economic growth. 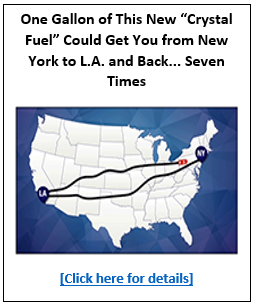 Many traders argue that the markets have “overpriced” the potential. Constant congressional bickering and the “resist” movement don’t make this any easier. A record 44% of investors believe the markets are overvalued.

It doesn’t matter whether we’re talking about Brexit, ISIS, Russia, Trump, Clinton or any of a dozen other things people spend too many brain cells on lately.

Trying to predict the unpredictable is an exercise in futility. What’s more, the fact that so many people believe the stock market is overvalued is a ginormous contrarian indicator which not only points to vastly underestimated profit potential but a rally.

We could talk about that till the cows come home and it wouldn’t be a wasted discussion. However, that’d be overkill for what we’re trying to accomplish today – a high level overview.

What you really want to understand is the concept of liquidity. Simply put, as long as that’s increasing, prices and profits will, too.

It’s an equation that we’ve talked about many times because there are huge piles of money that have to be put to work in everything from individual accounts to pension funds, proprietary trading shops and even central banks around the world. And, that’s in a world where people assume the worst!

Imagine what happens if monetary policy actually shifts to stability and strength. The question then becomes how much higher and faster can markets go not what might cause them to roll over as most investors trying to time the markets “think.”

I believe we’ll get there later this year if for no other reason that politicians have boxed themselves into a corner. It doesn’t matter whether we’re talking here in America, across the pond in the Britain or France or a dozen other EU states nor in the Far East. The rise of populist thinking dictates that they have to play the growth card because it’s the only one they have left.

More than any other factor, that suggests more money flowing into markets rather than away from them. It don’t be in a straight line, of course, but then again rising markets never are.

Tom Gentile’s found an unusual pattern unfolding in the gold markets that could double your money in 60 days or less. And he’s about to release the kind of trade recommendations we’ve already seen hit 456.3% total profits. To be sure you’re ready for Monday’s opening bell, go here now or risk missing out completely.

Even without tax reform, earnings are forecast to grow by as much as 10% this year. That tells me that traders still have their foot firmly planted on the proverbial gas pedal. Sure we’ll have some minor ups and downs but the path of least resistance is still higher into 2018.

Momentum will be strongest in companies that are:

a) In charge of their own destiny rather than that imposed upon them by Washington, and

b) Those with large enough liquidity to absorb the hundreds of billions of dollars in fresh capital that’s naturally attracted to them.

At the same time, remember our trends from Wednesday.

The five most valuable companies in the world today, certainly in US markets, didn’t exist 50 years ago.

So, rather than trying to hang on to outmoded thinking like many investors are, what you want to be doing is shift your thinking to those investments which are changing the very fabric of our society. (Like new forms of energy that even have the Saudis and the DoD in agreement)

It’s not a coincidence, for example, that Tesla Inc. (NasdaqGS:TSLA) is worth more than General Motors Company (NYSE:GM) as of press time. Nor is it pure chance that Snap Inc. (NYSE:SNAP) went public despite being one of the worst examples I’ve seen in years of anything even remotely resembling a viable business.

I think you’ll also want to prioritize dividend-paying companies into the tail end of this year.

Many institutional investors, you see, are dramatically behind the 8-ball, which means they’re going to have to do some heavy buying just to get the right names in their reports come tax time – when anxious investors are reviewing their performance-based fees.

Of course, there’s another benefit, too. Dividend paying companies tend to be far more stable than their non-dividend paying brethren which will serve you well should Trump’s agenda lose its mojo and markets take a header. Overseas choices like Royal Dutch Shell plc (NYSE:RDS-B) may be even better bets considering that company’s tax advantages and U.S. listing.

Gold’s probably a non-starter simply because most of the truly speculative buying that used to create such welcome volatility has transitioned to Bitcoin, marijuana stocks, and other speculative choices with the potential to rudely surprise speculators who fancy themselves true investors. Gold’s important… just not the do-all, end-all that it once was.

Speaking of which, the Fed is clearly charting a course to higher rates yet, for all intents and purposes, remains on track for the slowest normalization in recorded history. That tells me bonds are still viable and very necessary through the end of this year even as rates rise. Probably beyond.

Many investors don’t think the rates are high enough to merit the risk but I respectfully disagree, which is why choices like the PowerShares Senior Loan Portfolio are worth thinking about. The fund holds senior floating rate notes that are securitized loans with coupon rates pegged to prevailing interest rates. That’s because the coupons are reset as rates rise which means that tends to be far more stable over time than most investors who fear a rate hike believe.

[TRENDING] On June 23, 2017 a historic medical discovery will be announced to the world… [click for more]

Let’s wind up with a quick look at volatility which continues to scape along at bottom-of-the-barrel levels as measured by the VIX. Most people think this demonstrates complacency when in reality what it means is traders simply are not all that concerned about hedging the next 30 days of trading activity.

Contrary to what a lot of people believe, the VIX has no predictive value whatsoever. To put it bluntly, it’s the different between the possibility that you will crash your car versus the expectations that you will.

If you’re a United States taxpayer, you’re eligible to claim $2,300 dollars every month, tax-free. Due to a massive tobacco settlement, the “Big Four of Big Tobacco” are handing over $206 billion to 46 states for the next 25 years alone. And you could cash in even if you’ve never smoked a day in your life. Click here to learn more.

As always, I’ll be with you every step of the way.