Double Your Money on the Fastest-Growing Defense Sector

[Editor’s Note] With the North Korean situation accelerating, Keith wants to make sure you don’t miss the best play in an already-hot defense sector. But this isn’t the only opportunity he has up his sleeve. Keep an eye out for the upcoming Money Map Report issue, where he’ll be revealing an undiscovered stock dominating the new age of cybersecurity.

In my conversations with contacts around the world, I keep hearing the same word come up to describe the threat America faces…

Most of the time, they’re referring to ISIS, which has thankfully been forced on the defensive as of late, but the term could apply equally to Russia, to North Korea and, yes, to China – all of which have made bits and bytes their weapon of choice.

In the words of National Security Agency Director Michael Rogers, “we need to assume there’s a cyber dimension in every area we deal with,” when it comes to evaluating national security threats today.

[URGENT] A man this decorated deserves your attention. He has three Distinguished Service Medals from Presidents Nixon, Reagan, and Clinton – to say nothing of his 23 commendations from the U.S. Intelligence Community. No wonder 29 world governments trust him as an official energy policy advisor. And what you can learn from him today could mean astonishing gains for you. Click here now.

This is so serious that more than 100 countries are building up military cyber-commands, not all of which are understood by civilian leaders.

Fifteen percent of all military defense contractor mergers within the past few years have involved cyber-companies intent on developing new cyber weapons, according to P.W. Singer, Director of the Center for 21st Century Security and Intelligence, and a senior fellow at the Brookings Institute.

What makes this so scary is the fact that the bad guys want to harness digital networks in a way that causes millions of people physical harm. Taking down an air defense net would allow a missile attack that previously wouldn’t have been possible, for example. Cratering a cooling tower could enable a nuclear meltdown.

Many investors don’t think of it this way, but what I am describing is an entirely new form of international competition. And one we must win.

Stuxnet, a computer virus widely rumored to have been created by the United States and Israel in order to combat Iran’s nuclear program, is a great example.

Made up of ones and zeros, it was the digital equivalent of a nuclear weapon because it was launched, targeted, and triggered autonomously.

To speak very bluntly, we’re talking about a new arms race worth trillions over the next years.

A sentiment echoed by Britain’s spy chief, Alexander Younger, who warned that the West is “in an arms race against terrorists, malicious actors in cyberspace, and criminals.”

Counterterrorist officials are right to be spooked. One knowledgeable 12-year-old with a grudge can do serious damage, but a hostile enemy with the right backing could bring down our way of life – unless we proactively stop them.

Remarking on the devastation in the days following World War II, it was Albert Einstein who reportedly quipped, “I have no idea what weapons we’ll be using in World War III, but World War IV will be fought with sticks and stones.”

Some 70 years on, Einstein is right.

Tomorrow’s cyber terrorists could potentially do more damage with a single keyboard stroke than with a bomb as the cost of an attack goes down and the availability of the digital capacity to carry it  out increases dramatically.

A report from the Cambridge Centre for Risk Studies found that the damage from a foreign cyberattack on America’s power grid alone could cost the U.S. economy more than $1 trillion as it leaves tens of millions without power, cripples thousands of businesses, and hobbles international trade.

[TRENDING] The Wall Street goons want to keep you out… but we can show you ow to take advantage of this perfect storm event in the markets.

A word of warning: If you’re conventional in your thinking, this isn’t for you. But if you want to learn how to make an average of 44% gains per day (including partial closeouts), click here. 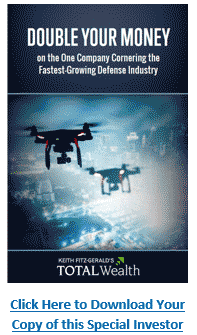 Some reports even put the potential death toll of such an attack in the tens of thousands, as millions of Americans are denied hospital visits, or even access to basic life necessities, for days or weeks at a time. B

ecause of the deadly ripple effects through the economy, it’s easy to envision a cyberattack on America’s power grid as being far deadlier, both in terms of economic cost and loss of human life, than 9/11.

And, speaking of terrorism… cyberattacks are now the vehicle of choice for multiple jihadist groups around the world to inflict economic damage in places beyond their physical reach. Since 2014, at least seven pro-ISIS hacking groups launched cyberattacks with the goal of aiding the Islamic State.

An analysis of the United Cyber Caliphate, ISIS’s main hacking organization, found that while many of its methods are unsophisticated today, ISIS’s cyber reach could grow exponentially as it recruits more talent worldwide.

This is why naming cyberterrorism as the top threat America faces is no longer a controversial statement, even though it resulted in mockery when then-Defense Secretary Leon Panetta made that claim in 2012.

There has been a seismic shift in U.S. national security preparation and spending underway. Spending has already more than doubled from $25 billion in 2006 to nearly $60 billion by the end of 2016.

Amazingly, most investors are completely missing the boat – not to mention the profits, too!

I don’t want that to be you.

Click here for everything you need to know about the stock that’s dominating this incredible trend.