My eyebrows shot up.

Not only because Gary Vee – that’s how he’s known the inspirational wealth building crowd – is right, but because of the specific choice of words he used.

The concept is critical in today’s markets and when it comes to your money.

Here’s what you need to know…

Gary Vaynerchuk is a serial entrepreneur worth north of $100 million according to various sources. Some say perhaps even $160 million. Either way, people listen when he speaks… as they should.

I ran across a CNBC story last week in which he talked about a side-hustle he calls “retail arbitrage flipping.” And, I about fell out of my chair for reasons that will become clear in a moment.

The concept is very simple.

Hustlers – meaning people who are interested in breaking free of the rat race by creating another stream of income, often part-time – buy stuff at discounted prices from Walmart Inc. (NYSE:WMT), TJ Maxx of The TJX Companies Inc. (NYSE:TJX), or Target Corp. (NYSE:TGT), then sell it online at higher prices via eBay, Craigslist, or Amazon.

That’s music to my ears.

The same principle applies with your investing dollars. And, that’s why I created Straight Line Profits and pioneered something called the “Arbitrage Detection Grid,” or ADG for short.

I screen thousands of stocks the way Vaynerchuk is encouraging people to screen items they sell. And, similarly, when you find something you can buy for less then sell it for more – I encourage people to pounce.

You wait, and you lose.

[URGENT] The Secret to Achieving the Retirement of Your Dreams

Vaynerchuk thinks failure comes down to people’s ambition according to CNBC – and I’m paraphrasing here… he sees people in debt “that are like ‘I’m not going to Marshalls (to buy stuff)” and he’s ‘s like “that’s why you’re a loser.”

Investors tell me constantly that they want to wait for “confirmation”, for the headlines to calm down, that they’re not ready, that stocks they want to buy are expensive. Any number of excuses.

I won’t go so far as to call those folks losers like Vaynerchuk does, but that’s what they’re doing if they don’t invest…losing.

Today’s highly computerized markets move quickly which means you have to do the same thing if you want to make money. No deliberating, no dilly-dallying around.

You identify something you can buy low and you sell high at or near its “true price.”

If you’re scared or uncertain, I get that. But that does not give you a license to whine about missing profits because you don’t take the time to spot opportunities and act upon them.

The ADG Grid, like Vaynerchuk’s method, is very simple and straightforward to understand.

I look for the strongest sectors then the strongest companies using a form of refined math originally developed by NASA’s Jet Propulsion Laboratory – JPL for short – to identify specific stocks the market has priced far below their “True Value.” Then, I recommend ’em. 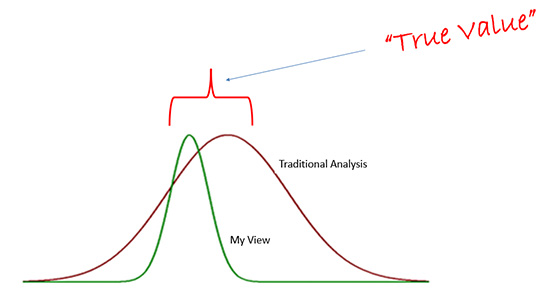 Or, if you’re mathematically inclined, something similar to this when applied against a traditional price chart and proprietary variables unique to the ADG calculations.

Ask Gary Vaynerchuk. He’s – again – worth $160 million and one of the savviest people on the planet when it comes to spotting opportunity.

Ask Warren Buffett. He pioneered the concept of buying companies using their intrinsic value, knowing full well they’re worth a whole lot more. Every $10,000 invested in Warren Buffett’s Berkshire Hathaway when he became a majority shareholder in 1964 would be worth a jaw dropping $162.37 million today.

That’s not a typo!

[CRITICAL] How to Get Million Dollar Masterclasses for Just $1

My point, mind you, is NOT to sell you something.

Let’s be clear about that.

What I want you to understand is that here you have three different and very successful individuals, all of whom hunt for opportunity based on the concept we’ve just discussed…spotting things selling at prices different than they should or could be.

You can carefully research Warren Buffett’s holdings by digging into Berkshire Hathaway a bit. Or learn where Roger’s is focused and what he’s thinking about by reading up on what he’s saying in the media.

Or, you can even follow Gary Vaynerchuk on social media to all sorts of interesting side-hustles. He’s definitely got a few strong opinions on the matter, not mention 1.92 million followers on Twitter.

Just make a decision in light of what we’ve discussed today.

The sooner you get the notion of paying less for a company in your head than it’s actually worth, the sooner you can get down to making real money.

By the way, if you ARE interested in Straight Line Profits, feel free to watch a very informative summit I filmed earlier this year. It’s available by clicking here. Then imagine what a difference the 41 double- and triple-digit winning plays I’ve brought to readers’ attention could mean to you.

But only if you “hustle.”