People ask me frequently how I can confidently and accurately predict the markets, especially when they’re at new highs and fears of a correction run rampant.

And, my answer is always the same.

I don’t predict anything.

I simply know something most investors don’t.

And, today I’m going to let you in on the secret.

Millions of investors have been taught that you can’t predict the markets.

So much so that nearly every major university in the world today teaches some variation that you can’t. The notion is so widely accepted, in fact, that it’s become dogma.

To suggest otherwise is akin to financial heresy – which is why I’ll never get a PhD, but that’s a story for another time.

The thinking rests largely on the work of two exceptionally brilliant individuals who have my complete respect, and from whom I’ve learned a lot over the years: Princeton economist Dr. Burton Gordon Mailkiel and Nobel Prize winning, University of Chicago economist Dr. Eugene Fama.

Malkiel published a groundbreaking book in 1973 called a Random Walk Down Wall Street in which he argued very persuasively that one cannot consistently beat the markets because asset prices exhibit signs of “random walk.” It’s still a seminal work and required reading in a lot of investment-related coursework.

Fama pioneered the closely related “efficient-market hypothesis” which posits that stocks always trade at their “fair value” and that it’s therefore impossible for investors to purchase undervalued stocks or sell those that are overvalued for higher prices. That, too, is widely taught at universities around the world, and foundational thinking for serious investors.

I believe they’re both wrong.

Not one investor in 1,000 has heard of the term, but they’d be wise to learn.

Gamma is an option “Greek” and a very specialized calculation that measures how fast the price of an option will move when the underlying security to which it’s tied changes price.

Gamma is critically important, even if you’re not an options trader.

Options traders are commonly taught to evaluate gamma as a means of assessing the rate of change in prices with higher gamma positions deemed riskier because a bigger move will have a disproportionately large impact and introduce more volatility than lower gamma alternatives.

That’s great for individual options and the underlying securities they’re based on, but almost entirely useless when it comes to the markets themselves.

For that you need a different tool.

My favorite is something called the GEX™, a relatively new index calculation that attempts to measure overall gamma exposure from SqueezeMetrics. It’s free, and you can see it right here.

When the GEX™ is high, further price movement is limited in whatever prevailing direction prices have been moving. If the markets are up for example, then down is the likely outcome as market makers and other big players hedge their bets using high gamma options “at the money.”

Conversely, when the GEX™ is low, there’s an accelerator of sorts present because investors and traders will have to chase price to mitigate losses. This is a fancy way of saying that it’ll push price with the prevailing direction as opposed to against it as is the case with a high GEX™ reading.

Right now the GEX™ reading is 6.7 million and comparatively high as the markets flirt with new highs. This matches my own research and proprietary gamma calculations and suggests a short-term correction is in the works. 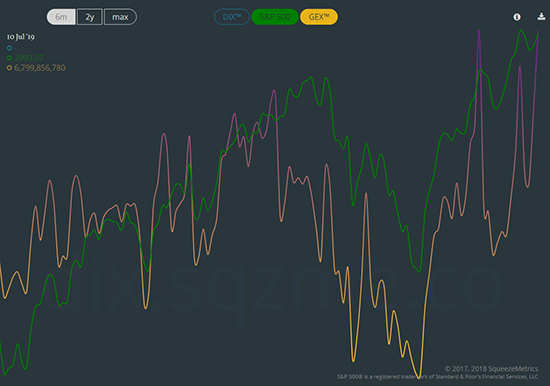 My favorite way to play that is, not surprisingly, to purchase at the money puts on the S&P 500 where – you guessed it – gamma is highest. That said, I believe the markets will resume their march higher by autumn so what you’ll want to do if you’re interested in following along is buy the SPY August 16, 2019 $300 Put (SPY190816P00300000) to limit risk and maximize potential profits by making a high gamma trade of your own.

Obviously, this is a speculative move so don’t bet the farm on this or any other recommendation for that matter. Instead, consider the 2% Rule before you make your move.

The other thing to keep in mind is that I’m writing this column on Wednesday evening, which means that the move may have already happened by the time this column is published on Friday.

In that case, use what we’ve talked about today as a teaching moment or, if you’re so inclined, consider subscribing to one of our sister services like Straight Line Profits, where I do recommend trades similar to this one, in real time, to paid subscribers.

Either way, get ready.

The rise in gamma suggests some quick counter-trend profits may be right around the corner!