Millions of investors are making the mistake of their investing lives, especially when it comes to Apple. Critics say:

Still, if you’re not buying Apple now, you’ll be kicking yourself later.

I think the stock could double in 24 months or less.

Let me be blunt.

Every investor has a story about the “one that got away” – meaning that stock you just knew was going to explode. And it did, only you weren’t on board, a move that cost you big time.

I’ve talked with gobs of of investors over the years at conferences around the world and the stocks change but the story is almost inevitably the same.

It’s not uncommon to have missed out on tens of thousands of dollars, hundreds of thousands or, even in the case of Google’s parent company, Alphabet Inc. (NasdaqGS:GOOGL), Microsoft Corp. (NasdaqGS:MSFT), and Netflix Inc. (NasdaqGS:NFLX)…millions… Because you can’t get by your own preconceived notions about what a stock’s worth.

That doesn’t have to happen. We are all born with common sense, it’s just bred out of us as we become adults.

Which brings me back to Apple Inc. (NasdaqGS:AAPL).

Many investors thought I’d gone around the bend back in October 2017, when I first mentioned my belief that the company would be making a fundamental pivot into medical devices. It would be, I said at the time, the end of the device-driven company people thought they knew.

Mainstream analysts scoffed and were openly critical because they were trapped in the past and couldn’t see the future I was describing.

The United States is the world’s largest medical devices market and is worth at least $156 billion, according to a SelectUSA.gov publication. It may hit $800 billion by 2030, a figure I find hopelessly understated.

We’re talking about everything from power patient-monitoring devices to diagnostic imagine, scanning, and feedback…all of which is powered – pardon the pun – by an aging population, increases in obesity, and every disease you can imagine.

Apple is plowing in full speed.

[BREAKING] Claim Your Piece of This $12 Trillion Cash Rush

The Apple Watch Series 4 became a Class 2 medical device last year and was the first ever such product offered direct to consumers over the counter. It can be used to detect irregular heart rhythms and even produce a personal electrocardiogram – “EKG” for short. The device can also detect falls and, if needed, deliver an alert and automatically call for help if you don’t.

Apple created the only FDA-cleared Smart Insulin Pen and paired it with an integrated Apple iOS app December 2017. The pen not only calculates dosage, but also keeps track of injection therapy data you and your physician can review together or independently. Importantly, dosage corrections and adjustments can be made instantly, without wasting insulin or needles.

Apple’s also worked closely with developers to create a variety of health related accessories including the iHealth Wireless Body Analysis Scale, iHealth Glucometers, Beddit Sleep Monitors, and even BACTrack Breathalyzers among other things.

And, on a related front, Apple’s working hard with hospitals, physicians and – you guessed it – insurance companies to connect patient data with those who need it to render more effective, safer care, either in a hospital, clinic, or home setting. There are even custom research apps available to medical researchers.

Unfortunately, investors tend to view these devices in insolation. That’s why so many can’t move on, let alone see where Apple’s going.

If you’re on the fence, you’re not alone.

What I am talking about is not a simple change, and it doesn’t fit into the well understood narrative that’s made Apple what it is today.

But to talk about what Apple becomes tomorrow?

That requires a different vision.

You can easily visualize the profits Apple’s got ahead when you start thinking about the company in terms of the ecosystem it’s creating. 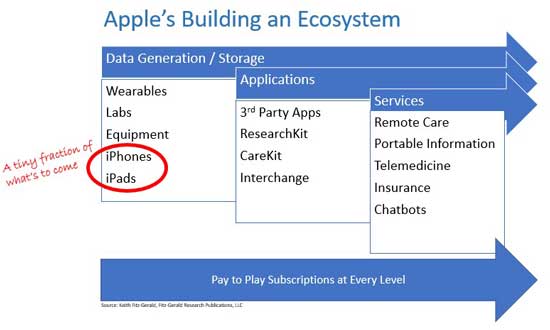 [CRITICAL] If You Want To Save Yourself and Your Loved Ones From Financial Ruin, Act NOW

I think Apple doubles in the next 24 months, perhaps sooner.

The best way to play that depends on your personal risk tolerance and objectives.

Beginners or newly minted investors may want to consider a mutual fund or ETF like the XLK Technology Select Sector SPDR Fund (NYSEArca:XLK) where Apple is a key holding. This isn’t a pure play, but that’s not necessarily a bad thing, either. You’ll sweep in a lot of other tech that’ll go along for the ride.

Or, consider buying Apple shares a few at a time if you’re in a position to do so. Wall Street would have you believe that everything has to be in lots of 100 shares, but that’s not true. Stipulate an “odd-lot” and tell your broker how many shares you want to buy. The number can range from a single share at $202.96 to dozens. Anything not divisible by 100 qualifies.

If you’re options savvy, consider buying LEAPs – that’s an acronym meaning Long Term Equity Anticipation Securities. You can control 100 shares for a fraction of the capital otherwise required to buy directly. There are also all sorts of spreads you can buy or sell depending on your skill and risk tolerance.

Or, use one of my favorite Total Wealth Tactics like the LowBall Order to name your price. Then, like a fisherman, simply wait until somebody takes the “bait.”

At the end of the day, my point is this.

The Apple of tomorrow is going to be a radically different company than most investors understand. And that’s your opening.

Even if shares go lower first.