Why Some Earnings Are Rallying, While Others Are Falling Flat | Total Wealth Research
Main Menu

Why Some Earnings Are Rallying, While Others Are Falling Flat

Earnings reports are starting to roll in, and Keith Fitz-Gerald’s ready. On Varney & Co. Monday morning, Keith went into details:

“I think [tech earnings are] going to be very, very strong, much stronger than many people expect. Now, arguably, the bar is pretty low to begin with, but that doesn’t change the fact that these companies are doing very innovative things, changing the world we live in. And I think that is worth a lot of money to savvy investors.”

Earnings are all about two things: outlook and expectations. He’s repeatedly called out doom and gloomers, counseling that earnings will – yet again – be stronger than expected, giving the companies that come out on top a favorable boost.

Keith then had a chance to talk about a few other things, which ranged from China to Disney to Equifax.

On China, Keith started off by talking about the rising dissention in China, and, more importantly, what it means for Chinese negotiations. Is it part of the trade negotiations? Keith weighs in.

From there, the discussion turned to The Walt Disney Co. (NYSE:DIS), and how their streaming service is stacking up to Netflix, Hulu, and even Amazon Prime. Disney has an edge over the competition, and Keith is revealing why libraries and content will come out on top compared to services that are simply providers.

This edge puts Disney in the running as an Unstoppable Trend – Technology – and it’s a Buy at $141.04. Alternatively, Keith says you can wait until the next correction and jump in then.

Next, the conversation turned to Equifax Inc. (NYSE:EFX), which may have to pay as much as $700 million in fines due to a data breach – and Keith thinks they’re getting off easy.

“I think there should have been criminal charges; they have involuntarily made all of us customers and, and they are reaping the benefits from that,” he explained on air. “I think to allow them to settle is a mistake. There should have been depositions, they should have thrown a harsh light on how the business works into the spotlight.”

The Equifax settlement stinks because it highlights one of the unseen risks of technology, where consumers ARE the product, whether they like it or not.

Of course, Technology is still one of the Unstoppable Trends, and that’s why the sector is ripe with must-have companies – Equifax aside. Look at Visa Inc. (NYSE:V), Amazon.com Inc. (NasdaqGS:AMZN), and Google’s Alphabet Inc. (NasdaqGS:GOOGL) – these are all companies that are revolutionizing the world.

Before signing off, Keith made sure to touch on Chevrolet. The company is releasing their new Corvette C8, and Keith called it “Harley Davidson Inc. (NYSE:HOG) on four wheels,” which is far from a compliment.

The reality is that the Corvette is an iconic brand, and one that caters to a specific market of people. Corvette buyers are dying out and people aren’t flocking from Porsche, Ferrari, and Jaguars to buy the newest ‘Vette. The company can’t adapt, and it’s hurting their bottom line.

Keith’s advice? Don’t buy automakers – buy the technology that’s driving them. He’s talking about the companies that are developing the newest AI software, digital sensors, and the like – just follow the Unstoppable Trends.

If you don’t know where to start, Keith’s got you covered. He recommends the companies backed by the six Unstoppable Trends in his sister research service, Money Map Report, which you can sign up for today – and start receiving weekly alerts, monthly reports with two recommendations per month. Click here for more details. 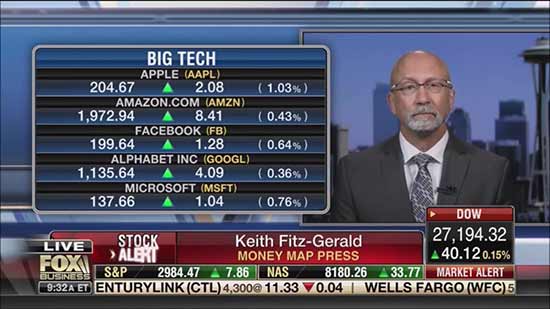