A 437.93% Advantage - Practically No Matter What the Markets Do Next | Total Wealth Research
Main Menu

A 437.93% Advantage – Practically No Matter What the Markets Do Next

Achieving higher returns is easier than you think.

All you need is the right portfolio structure.

There’s no question that having the right stock picks is important, which is why we talk about those frequently – but that’s only part of the proverbial equation.

Folks who blindly leap from stock to stock, for example, are in for a rude awakening, even if they’re investing in the big winners like Amazon.com Inc. (NasdaqGS:AMZN), Alphabet Inc. (NasdaqGS:GOOG), Apple Inc. (NasdaqGS:AAPL), and/or Raytheon Co. (NYSE:RTN) that we’ve covered together.

That’s because the risk associated with their money changes.

Sadly, most folks are completely blind to the potential, so they leave a lot of money on the table that could be – rather bluntly – in their pockets. Heck, in your pockets.

As always, I’ve got a recommendation for you that makes an ideal cornerstone investment for any investor interested in both the truth and higher returns.

Like many investors, I grew up thinking that individual stocks were the way to go. Certainly, everything I read as a young man coming into finance reinforced that notion: Forbes, Money Magazine, and Kiplinger’s, just to name a few.

Then I arrived at Wilshire Associates in the late 1980s with a newly minted diploma in my hands and quickly learned how money really works.

My boss, a hyper-focused and brilliant guy named Larry Davanzo, told me in no uncertain terms that portfolio structure was something I’d better come to understand if I wanted to be successful – and with billions on the line, he wasn’t kidding. So, I spent hours in my cubicle burning all kinds of midnight oil and plenty of weekends, too.

Like many professionals at the time, I focused much of my attention on a 1986 study by Gary Brinson, L. Randolph Hood, and Gilbert Beebower called the “Determinants of Portfolio Performance.” It examined quarterly returns from 91 pension plans over a 10-year period from 1974 to 1983 and concluded that asset allocation accounted for 93.6% of the volatility of quarterly returns.

The implication was huge; if performance comes primarily from asset allocation, then why bother with actively managed stocks and portfolio management?

It was the start of a badly flawed (and disproven) line of thinking that’s still embodied today in the concept of passively-managed portfolios advocated by well-known, well-intentioned people like Jack Bogle and Burton Malkiel – but that’s a story for another time.

Something didn’t sit well with me and it took me years to put my finger on it, not to mention do the math to prove it.

The 1986 study focused almost entirely on rebalancing to the exclusion of market opportunity. That meant the original research had almost no discussion regarding active management nor assumed risk as valuations changed.

In other words, the authors assumed that money was simply “along for the ride” rather than in the driver’s seat. It also meant that the role of diversified stock pickers was almost completely ignored.

Over the years, I continued to play with this thought. Others like Roger Ibbotson and Warren Buffett, who are considerably smarter than I am, did, too.

Ultimately, I developed this revelation into a risk parity model now known as the “50-40-10,” which I pioneered and advocate today as part of our sister publication, the Money Map Report.

It’s based on the notion that specific levels of risk that are divided equally across the entire portfolio as a means of achieving the optimal asset concentration needed for higher returns. Traditional allocation strategies, by comparison, are based on having fixed percentages in specific asset categories… stocks, bonds, real estate, metals, etc.

The advantage of a risk parity approach is that you can easily measure the contribution of every investment to your overall portfolio’s risk and, by implication, manage that change over time. You cannot actively do that with conventional models and you sure as heck cannot do that passively as is taught in universities worldwide as part of the Efficient Markets Hypothesis.

If you’re into math, here’s one variation of a formula you can use to calculate your own risk parity model drawn from a great primer on the subject: An Introduction to Risk Parity by Dr. Hossein Kazemi, of the Isenberg School of Management at UMassAmherst:

If you’re not into math, have no fear. I’ve got you covered.

What you need to know is that it doesn’t matter whether you have a few thousand dollars to your name or hundreds of millions. You can make the 50-40-10 work for you and your money. 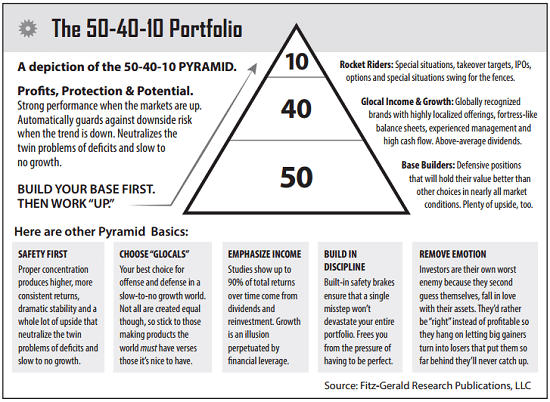 Think of the model like the food pyramid you may remember as a kid.

The bottom layer – the 50 – is chock full of stuff your mom told you to eat because it’s good for you, even though you thought it tasted like wallpaper paste. These are “foundational” investments chosen for their ability to withstand market volatility while giving you a rock-solid base from which to pursue growth.

The middle layer – the 40 – is the stuff that tastes good and makes you want seconds because it helps you grow. These are typically global companies with fortress-like balance sheets growing top and bottom line numbers, making “must-have” products and services tapped into the Unstoppable Trends we talk about frequently. Most typically have above average yields, too, making them a super choice for income oriented investors.

The top layer – the 10 – is the beer, and chips, or the chocolate mousse, depending on your palate. It’s the much higher risk stuff that can make you fat if you eat too much but when used in the right way can really put a smile on your face, not to mention some serious bling in your wallet. They’re usually oriented around a specific catalyst that our research has uncovered. Examples include new patents, contracts, buyouts, spinoffs, etc.

I like the pyramid illustration because it’s simple. One quick look and you know which side represents the bottom, which represents the top and, of course, the middle. Visually, you understand quickly and easily that the higher you go “up” the pyramid, the more limited your choices become. (Try climbing one sometime and you’ll see exactly what I mean.)

Even better, the pyramid forces you to “eat” healthier choices when it comes to your money – just like a balanced meal. So you have discipline injected into your investment process automatically. You can’t tuck into the soda, the mousse, or the chips if you’re minding your money, for example.

I bring this up because many investors wind up with far too many speculative investments on their financial plate. They get caught up in their emotions when they buy things. Not surprisingly, they almost always find out the hard way that they’ve been speculating when they should have been investing whenever the market hiccups.

That’s primarily because their risk is disproportionately concentrated even though their allocation may be spot on, according to conventional Wall Street thinking. Ask anybody who lived through the dot.bomb crash and the Financial Crisis how that worked out when everything went down at once and conventional diversification models failed… completely.

I hear from people all the time that the sky is falling, things are terrible, and there’s nothing to invest in. And, I couldn’t think of a better way to allay their fears than to use data from the worst financial periods in modern history.

So, I constructed a hypothetical $10,000 portfolio using just 11 investments and split them up according to the 50-40-10 model. Then, I let it run from August 1, 2000 to November 1, 2019 and rebalanced annually on the first trading day of every year using publicly available closing prices from Yahoo! Finance and Kitco Precious Metals to keep things simple.

I chose those dates very deliberately because that time frame includes several wars, recessions, market crashes, terrorism, and even a global collapse, just for good measure. 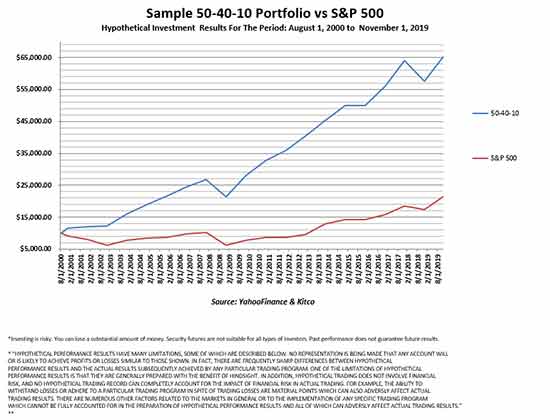 Past performance is no guarantee of future performance, and all investing, as they say, involves risk. I have nothing against people who are worried. That’s very normal, albeit emotional input. What I want you to understand is that history shows, beyond any shadow of a doubt, that there is a way around every market obstacle.

Speaking of which, I get asked a lot how the model has fared over the more recent past. Usually, the thinly veiled (and cynical) implication is that “things will be different this time.”

Until you let go of the concept that spreading your money around willy-nilly using Wall Street’s classic approach to diversification and the Efficient Market Hypothesis is the way to go, you are at the mercy of unseen risks, not to mention emotional hang-ups. Both can override what you logically understand about the world we presently live in.

Risk parity – and the 50-40-10 model in particular – can help ensure you never miss another market move ever again while still protecting your capital from getting carried out feet first when the markets pitch a fit. But only if you get on board.

Speaking of which, there are all kinds of ways you can assemble a 50-40-10 model for yourself, and we talk about those frequently in the Money Map Report – along with specific recommendations in each tier.

If you’re not a subscriber, you can get started with a core holding like Vanguard Wellington Fund (Nasdaq:VWELX).

Created in 1929, the Wellington is one of the most established mutual funds in history, has experienced management, and is part of a proven family of funds offering great stability, low fees, and easy access. Plus, it’s a great way to manage risk and a path to higher returns even if you’re not sure how to define it in today’s complicated markets.

It’s also a great “foundation” around which to build your portfolio.

If you want some deeper insight into the 50-40-10 model, make sure you check out the Money Map Report. Since the beginning of the year, we’ve closed 35 winning plays… and armed with our model, we’ve got a lot more where that’s coming from.