That’s a derogatory term bandied about in the Western press a decade ago by badly misinformed investors who were more interested in convincing themselves that China was about to collapse than paying attention to the rapid growth taking place there and the profits being created as that happened.

Huge, futuristic complexes in Kangbashi, Yujiapu, Meixi, and Pudong were viewed as singular failures because they stood “empty” by Western standards. Legions of otherwise rational investors saw them as proof-positive that China’s economic machine was on a one-way track to nowhere.

Today, though, many of those very same “Ghost Cities” are vibrant, urban and fully alive exactly as I told you they would be a decade ago. What’s more, China itself has emerged as global economic powerhouse capable of dominating any market it enters for decades to come even if there’s no trade agreement.

Shanghai’s Pudong District is a particular standout. Once China’s laughingstock because it was so empty, the area now has a 99% occupancy rate and is home to more than 5 million people according to Knight Frank, an international real estate consultancy.

Sadly, though, this will not be a tale of unrivaled prosperity like most people think. In fact, the opposite is true and I believe the numbers point to the potential for unrivaled financial devastation.

Let’s Talk About That Now

The “Green Rush” – which is one of many names attached to the newly legalized cannabis industry – is supposedly going to be a madcap dash to financial prosperity.

I think the opposite is true.

If you’ve been reading my work for any length of time, you know that I don’t think the cannabis industry is what it’s cracked up to be. Vaporized would be an apt term to my way of thinking, because that is what’s likely to happen to most people who invest in it assuming they haven’t gotten clipped already.

History is filled with examples of supposedly good examples that went bad, if they were ever “good” in the first place.

The Iraqi dinar, for example, was supposedly going to make investors rich when revalued, an event legions of rabid investors have claimed would happen “any day now” since Gulf I… in 1990. They trade right now at roughly 0.00084 to the U.S. Dollar (if you can find anyone willing to make a market).

The Vietnamese Dong fits nearly the same profile and will, like the Dinar, suddenly and without warning, be revalued to make millionaires of those who “invested” – or at least that’s how the story goes. People who bought in are more likely to get ding-donged, though – a pun I simply couldn’t resist (sorry).

Cryptocurrencies … don’t even get me started. Like many hapless folks bitten by “the need to get rich quick without risk”, Journalist Derek Rose put his life savings into ’em and was making more than $500,000 a day at first when he borrowed money to juice up the returns according to Inc. His holdings reached a $7 million at one point, but are now worth nothing.

Total global losses for cryptocurrencies eclipsed $706 billion in 2018 according to CoinMarketCap. Experts like He Ning of QOS, a blockchain infrastructure builder told Forbes that he thinks 99% of all crypto-exchanges will have to vanish for a “new bull market to arrive.” Assuming the worldwide crypto market is $246.8 billion, that’s a staggering $244.34 billion that will be vaporized at some point in the future.

Way back when, there was Charles Ponzi whose name is now synonymous with scams that depend on newly converted entrants to cash out those who bought in earlier. Even tulip bulbs in 1637 qualify.

People make a critical mistake by thinking that crap like this will be valuable because demand will be so high. In reality, supply is the determining factor, especially if you’re talking about something for which there is an alternative.

This is where the real money is made and, unfortunately, lost.

According to Risk Hedge, just two firms – Aurora Cannabis Inc. (NYSE:ACB) and Canopy Growth Corp. (NYSE:CGC) – two of the hottest “pot stock” investments out there – have so much production capacity that you could roll more than 4 billion joints using just the pot they’ve got on hand and still not put a dent in overall supply.

If sales were expanding at the same pace, the story would play out very differently but that’s not happening.

The cannabis industry as a whole is barely profitable and even that’s debatable because weaker producers are burning through money to expand operations at a breakneck pace according to IBD earlier this month.

Sales growth has proven to be only a fraction of what’s expected despite legalization that was supposed to be the do-all, end-all and make millionaires of everybody along for the ride. 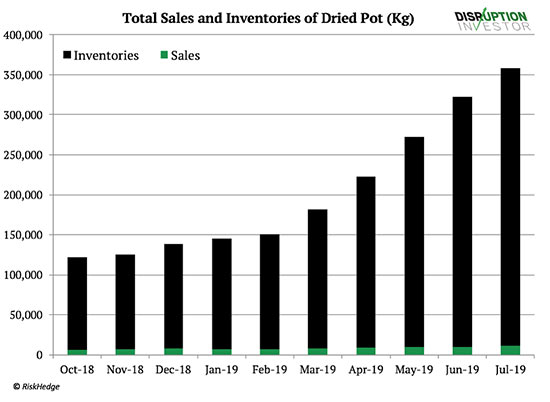 According to my back of the envelope calculations, that’s enough pot for every man, woman and child in this country to smoke 12 joints each with plenty left over. Again, keep in mind that we’re talking about just two of thousands of growers across north America.

The situation reminds me of what happened American famers experienced after WWII.

We’ve seen this playbook before.

American farmers produced so much corn, for example, during WWII that they were forced to burn it when the shooting stopped. Wheat was the same and, in fact, I remember my grandparents who lived in Wichita, Kansas telling stories when I grew up of farmers dumping it simply to boost whatever prices they could get. Anything was better than nothing went the thinking.

More recently, seed and chemical companies like Bayer AG and Monsanto are merging to cope with amazingly large harvests and what could be the largest surplus of wheat, corn and soybeans ever.

Demand for those crops, like cannabis, has stymied even as supply has increased exponentially. Part of that, according to BNN Bloomberg, is because consumers prefer dried flower products that are high in tetrahydrocannabinol (THC) – the stuff that gets you “stoned.”

[CRITICAL] In Under Two Minutes, You Can Be Set Up for Six-Figure Profits

Critics, of course, charge that legal cannabis demand will recover to match supply, yet can’t tell you when. Soon, they say.

Breathless analysts do their best to convince you that cannabis stocks are “green gold” when history suggests they’re more likely to resemble tarnished copper.

Still others counter that the wave of cannabis-infused edibles and drinkables will bring the relationship back in line and put profits back on the table.

I find that hard to imagine.

Reregulation has simply changed the playing field, not the basic laws of economics.

Oversupply is oversupply and, in turn, that means lower prices ahead. That, then, translates into smaller profits or monster losses which, of course, impact stock prices.

You cannot have higher prices if one half of the equation is missing.

You can have profits, though.

As we have discussed many times, there IS a way to invest in the cannabis industry. It’s just not what most investors think.

The key to profitability in a situation like this is buying put options that profit when share prices fall.

That’s what I recommended to paid subscribers in our paid sister service, High Velocity Profits, where everybody following along as directed had the opportunity to capture gains of 31.12%, 172.73% and 204.55% on Canopy Growth Corp. alone.

Or buying into bigger companies where there is a more stable revenue source to counteract the volatility associated with cannabis like ScottsMiracle-Gro Co. (NYSE:SMG) and Constellation Brand Inc. (NYSE:STZ).

The former’s up 69.70% from lows last December despite a pullback that started in August while the latter has had a much rockier ride of only 27.45%. Bayer AG is about where it started but has risen 27.25% since June.

At the end of the day, you have a choice.

If you want to buy into the booming cannabis industry, go ahead. You may get lucky but, odds are, you and your money will just get “rolled” by bigger more capitalized players with an inside track. You’ll be speculating… at best.

I’d rather see you invest.

That’s an entirely separate proposition, not to mention one with far more favorable odds.