The Japanese have a wonderful tradition of “firsts” associated with every new year and, for that reason, it’s the single most important holiday of the year here.

In contrast to the West where we view each new year as a transition from the last, the Japanese view every new year as being completely separate from any other year.

Not surprisingly, everything you’ve got to do in one year is something you want to wrap up that year. There are even bonenkai – year ending/forgetting – parties to help you do it.

Usually something for co-workers and colleagues, they’re a lot of fun. There’s great food, great laughter and, in recent years, lots of family participation, too. That’s a marked change from the rough and tumble “salaryman” culture when I started in Japan decades ago.

Here’s a fun video that I think you’ll enjoy from a young Canadian woman named Sharla who lives in Japan as she attends a few bonenkai parties.

Every new year, though, is a spectacular start.

A Year of Firsts

We traditionally eat toshikoshi soba – a buckwheat noodle – which represents longevity on New Year’s Eve, while also tuning into something called kohaku uta gassen, a special evening-long variety program featuring Japan’s most famous actors, actresses, and musicians. Temple bells ring all night, there are huge bonfires and lots of smiles.

Then, we head for our first shrine visit of the year. Here’s quick look at what that’s like. Note the contrast between the crowded midnight visit and the quieter daytime follow-ups. And, then, to top it all off, we bound out of bed to catch the year’s first sunrise.

I usually do a bit of martial arts practice to clear my mind as well, which, frankly, is a good thing considering the quantity of food on our table New Year’s Day!

Here’s some of what my wife whipped up – YUM! 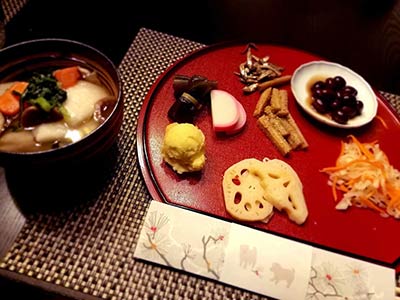 Speaking of which, I think 2020 is going to be a year of firsts.

Many investors are expecting a gut-wrenching correction, and honestly, that wouldn’t be out of line if we got one. (I don’t think we will, but that’s a subject for another time.)

… new AI systems being deployed for smart home use that will take us well beyond the simple Alexa/Siri/Google combination we have in play now – but as a service, not a product…

… the first true digital currency, and no, it’s NOT bitcoin or Libra…

… 5G interface taking us beyond phones…

I hope you’re as excited as I am by what’s ahead because there are going to be some huge profits up for grabs. And, it’s my job to help you find ’em!

Thanks for being part of the Total Wealth family,