I’m getting a lot of questions about that, in light of the coronavirus situation at the moment, as you might imagine. The markets are headed higher despite growing headline risk, and people aren’t quite sure how to react.

If you’re one of ’em and interested in learning how to trade options as a compliment to your regular investing activities, the technique I want to share with you could be right up your alley.

There are a lot of things to like about the trade not the least of which include a low entry cost and high profit potential.

I’m particularly drawn, however, to the defined risk, meaning that you know to the penny what your exposure ahead of time.

Before you spend even a penny in pursuit of profits.

Here’s what you need to know.

Let me ask you something.

Have you ever fancied a trip to Vegas where you can place a tiny bet that pays off big?

Lots of people have, including me.

The trade I want to show you today is a lot like that. It doesn’t require a lot of capital, but the payoff can be ginormous. What’s more, losses are strictly limited to the capital you invest in the trade, so the possibility of a complete flameout are drastically reduced when used properly.

I cannot stress that last item enough… most investors and traders get in trouble because they take on too much risk using techniques they don’t fully understand in market conditions they’re not prepared for.

I think there’s a good case to be made that the company will experience a short-term price decline in the next two weeks because of the coronavirus situation. Shares are trading at $307.05 as I type late Monday afternoon, but I think a fall to the $270 – $300 range is likely for the following reasons.

I may be wrong, so I’m also interested in limiting risk ahead of time as a means of controlling losses if shares don’t fall as expected.

History suggests that the news flow associated with viral outbreaks like this one – SARS, AvianFlu, etc. – tend to be initially discounted by markets, then pick up steam as headlines weaken and become scarier.

Let’s assume that you think – like I do – that this will happen within the next two weeks, by Valentine’s Day… but that you’re not interested in betting the farm, in case you’re wrong (or I’m wrong which is always possible).

One way to play the situation is via a an options trade called a “calendar spread.”

Calendar spreads are comprised of two or more options purchased at the same time on the same underlying asset – in this case Apple – at the same strike price but with different delivery months.

Here’s what you’d tell your broker.

Buy to open one calendar AAPL 100 21 Feb 20 while simultaneously buying to open one 14 February 285 put for $0.66 or less. Again, I’m using prices as of late Monday so they may differ materially by the time you read this Wednesday.

Here’s that that same order would look like on the TDAmeritrade’s Thinkorswim platform:

The total buying-power effect is $67.30 – meaning that’s what you’ll spend to make the trade including the cost of commissions. No margin, no hidden gotchas.

Here’s what the risk profile looks like, again using the Thinkorswim platform, but many other brokerage firms have similar charting capacity. 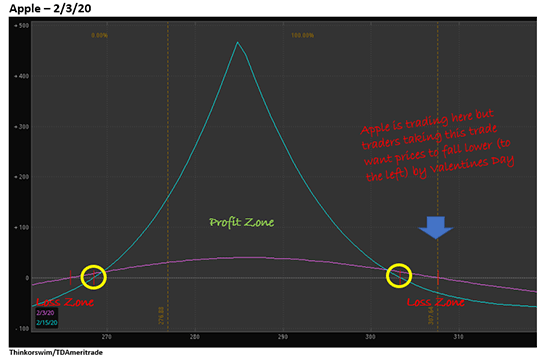 To reiterate, Apple is trading at little north of $307 per share, as I type.

The goal based on expectations I’ve laid out for purposes of our example is that Apple’s price falls by February 14, 2020 – Valentines Day.

The profit zone delineated by the blue line is pretty generous with maximum profit potential of roughly $450 on February 14th, if Apple’s shares settle at $285.41 per share at expiration. That works out to what could be a maximum 7:1 profit to risk ratio if the trade works. The line falls, as you can see, so profit potential varies if Apple’s shares settle higher or lower than $285 per share, but between the breakeven points. You could make a little or truly a lot if Apple settles in the profit zone.

It’s a speculative move intended to compliment your investing activities and you need to trade like this one as such. Never, ever put more into the trade than you can afford to lose to begin with. If Apple’s shares are outside the breakeven points at expiration, you will lose money. No, ifs, buts, or maybes.

Or use position sizing to arrive in the same neighborhood. Generally speaking, a simple Rule of Thumb is to limit trades like this to between 1% to 2% of total speculative capital, to control losses before you make the trade.

Some traders hold a spread like this all the way to expiration, while others will take profits when the spread hits a predetermined profit target of 50%, 100%, or some other figure that meets their goals. That’s entirely up to you and a function of your individual risk tolerance and investment objectives.

The really beautiful thing about this trade and one of the reasons that I wanted to share it with you today is that the calendar spread can be used with weekly, monthly, or quarterly options, and on any optionable stock where you think prices will fall. It’s can also be used with optionable indices, like the S&P 500. That gives it great flexibility and makes it imminently adjustable in accordance with your personal expectations.

As always, paper trade a technique like this first before you put real money on it.

The last thing you want to do is jump into a trade when you don’t have a solid grasp of what makes it work and what makes it fail. That’s how people blow up their accounts, and I don’t want to see that to happen to you!

And, finally, if you’re not sure what all this means, do NOT trade options, no matter how tempted you are by the profit potential I’ve outlined in today’s example.

There is always the risk of loss and options are not suitable for all investors.

4 Responses to A Low Cost, High Potential Trade When Downside Prices Are Possible