Five with Fitz: What You Need to Know to Protect AND Profit Despite the Coronavirus

When I started Total Wealth, I promised you that I would not only find and share the world’s best investment opportunities, but also give you behind the scenes information when it matters.

I’ve been up for most of the night crunching numbers and talking with traders around the world in an attempt to figure out what happens next, and what that means for your money.

There’s some early buying in the overnight markets as I type, which is a good sign but, as always, the situation could be radically different by the time you read this.

Everything I’ve been warning about for the past few weeks appears to be happening which means that it’s time to begin focusing on the flip side… what happens next.

Here’s what you need to know to protect your money AND profit in the weeks ahead.

Question #1: Is the party over?

No… it only feels that way.

There have been seven previous Monday meltdowns over the past decade during which the S&P 500 has fallen by 3%+. Six out of seven times, the index has rallied by an average of 1.74% the following day. However, one week later, the index was higher by an average of 3.80%. If those numbers hold, that implies that the S&P 500 should be up to 3,247.08 points, sometime next week.

What’s more, the vicious selloff was actually the 26th drop greater than 5% since the bull market began back in 2009 – a point that catches a lot of folks by surprise. 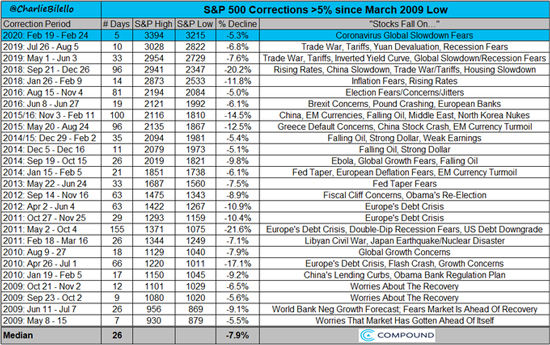 And, finally, the S&P 500 has declined more than 3% a whopping 71 times over the past 20 years, including Monday and Tuesday’s meltdowns. 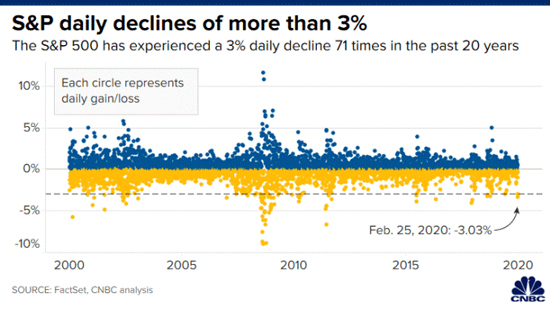 My point being (and you really need to think about this because every bone in your body is going to what to reject the facts I’ve just laid out) is this: corrections come and go a lot more often than people think.

The question is why and what you do about it.

First, don’t lean into the temptation that each dip is the end of the financial universe as we know it. Chances are good that it’s not.

Two, focus on which companies you want to own and those you’d “toss” if the selling worsens. This helps you pare down risk, lines you up with profits and ensures your emotions don’t get out of control in the heat of the moment.

Admittedly, I’m struggling to contain mine.

I’m a father, a husband and an investor – just like you. I share many of the concerns you’re feeling about the virus, about my financial security, about what happens next.

To be clear, I do NOT think those stats will hold.

What’s happening now “feels different,” a point I made again this past Monday during an appearance on Varney & Co.

Which brings me to the next question I’m getting frequently.

Question #2: Should I sell everything and run for the hills?

That’s tempting but, again, not something you want to do even if it “feels” good.

History shows beyond any shadow of a doubt that selling is a bad and very expensive mistake, unless that’s your only option for personal financial reasons like you need the money, have a major life situation, etc.

Case in point, ask anybody who sold out in March 2009 and never got back in. More than a few folks have told me they “felt great” at the time but have regretted the decision since.

Even with everything I’ve just shared with you about other massive selloffs, the S&P 500 is up 362.39% since the Global Financial Crisis. Most investors I know cannot afford to throw away that kind of profit potential.

To be clear, do not confuse what I am saying with the “buy and hope” strategy many investors seem to favor. That’s a marketing gimmick; what you need to be doing is “buy and manage,” especially today.

The markets will give you plenty of opportunity – the key is knowing how to find it and having the discipline and appropriate tactics to capitalize on chaos even when other investors will be crying in their beer or some other beverage of choice.

I suggest a spin through the Total Wealth archives for a quick read on why LowBall Ordersmake sense at the moment, or how the power of dividends can help you weather the storm. While you’re at it, read up on why it’s dangerous to believe a permabear, even – or should I say especially – now.

Question #3: Is there an easy way to hedge my portfolio?

Yes, plenty actually ranging from simple mutual funds and ETFs to all sorts of exotic options, futures and more.

I am a big fan of the KISS principle which is why I advocate Total Wealth Tactics like Trailing Stops and Profit Targets at all times, not just when it’s convenient which is how most investors think about things.

Case in point, paid subscribers following along as directed with recommendations in our sister publications, had the opportunity to take profits Tuesday using a Profit Target that helped capture 101% on a mid-sized clinical research company and a Trailing Stop that led to 61% on defense contractor… even though the markets were selling off.

I’m also a keen proponent of zigging when everything else zags, which is why I recommend specialized inverse funds like the Rydex Inverse S&P 500 Strategy Fund (RYURX) which appreciates as the S&P 500 Index declines or its cousin, the ProShares Short S&P 500 (NYSEArca:SH) exchange traded fund. Those are both UP by 6.38% and 6.5% respectively since last Friday’s close.

Don’t make the mistake of thinking this is an all or nothing decision, though.

Studies show that allocating as little as 1-3% of investable capital to a choice like these can substantially stabilize your overall investment portfolio while ensuring you have dramatically lower exposure to market volatility that will demoralize investors without a comparable safety net. It’s a move that can help you stay “in to win” – something that’s vitally important over time.

More sophisticated folks wanting to lock in specific profit targets or ranges may find options strategies like the Profit Collars I wrote about recently to their liking. Or, they may prefer to buy or sell directional bets, including various combinations of options spreads that accomplish the same thing.

At the end of the day, it doesn’t really matter which avenue you take.

Just that you take one, and stick to it!

Question #4: How bad could the coronavirus situation get?

Estimates are all over the map, pun sadly intended.

Epidemiologists I’ve talked to see two distinct possibilities at this point: a) that the virus becomes nothing more than a flu-like nuisance which surfaces annually or b) that the virus turns into a series of self-sustaining “blooms” in major urban areas where close-contact exposure is unavoidable.

My own experience with SARS and the Avian Flu in China makes me think that it’s the latter. I doubt very seriously that China is giving us anything even remotely resembling the whole story. Worse, I also believe the disease is already out of control because governments did not act quickly enough to contain the emerging risks.

From a financial perspective, I hear a lot of supposed experts talking about how the flu kills more people, that this is relatable to other experiences and so on.

What a load of crap.

I was livid to hear White House Director Larry Kudlow’s assessment that the US has contained the coronavirus and that the economy is “holding up.” And, said as much during a phoner with Yahoo!Finance Tuesday afternoon.

If that were true, the CDC wouldn’t be warning about “severe disruption to American life” nor would it be telling people to “get ready now!”

You may or may not agree and that’s okay. In fact, that’s great!

My job is not to take sides — good or bad, popular or not. My job is to assess probabilities and cold hard facts in my capacity as Chief Investment Strategist.

The possibility that we won’t have a major outbreak right here in the US is miniscule at this point. I see it as not a matter of “if” but “when” because of the nature of international air travel and reports that the virus is now jumping from person to person in Europe and the Middle East where health care systems are primitive if they exist at all.

Worst case, I see this stripping a few thousand points from the Dow and ten-year yields dropping as low as 1% before this is over. The difference between probable and possible is becoming more razor thin by the minute.

I’m not trying to scare you but I would be remiss if I didn’t tell you the truth.

In fact, my “buy list” is as long as a CVS receipt, but I’m content to “wait” this out for a bit until traders calm down, especially if you’ve been preconditioned to “buy the dips” like Wall Street wants.

The coronavirus is an exogenous shock to the system and that makes it a very different animal from fundamental downturns which are a dime a dozen.

Tactically speaking, I suggest that you buy in smaller amounts than you would otherwise with new money or use Total Wealth Tactics like Dollar Cost Averaging that can help you sidestep the volatility that’s scaring the pants off a lot of folks. Keep Trailing Stops a little tighter than normal; you can always buy back in if things calm down. Take profits a bit sooner than you would instead of shooting for the fences every time.

Sectors that are going to get clobbered – as if they haven’t been already – include anything related to retail exposure and to travel including, for example, reservation and travel companies, airlines, cruise lines and convention planning companies, destination resorts, casinos and the like.

Sectors that stand to gain (after the indiscriminate selling stops) include cyber shopping, big tech, remote medical providers, booze, and even trucking companies that’ll have to haul everything if and when social adjustments like closing schools and shutting down public gatherings are implemented.

To that end, I’ve got a special report coming out with 5 stocks shortly you’ll want to own immediately, even if there’s more selling ahead. And, how to buy them.

Question #5: What can investors buy that will “hold up” if the selling worsens?

There are no guarantees – period.

History shows that stocks with strong cash flow and dividends fall less and roar to recovery faster which is why you will want to be very “choosy” – a word I harped on in my 2020 Outlook published last January.

That means “must haves” like companies offering a built in defense against global recession like American Water Works (NYSE:AWK) and NextEra Energy (NYSE:NEE) or the two new recommendations I’ll be sharing with paid subscribers in the upcoming Money Map Report.

There’s no need to rush into anything… or, for that matter, out of anything.

This is why we have a plan at all times.

In closing, let me leave you with a thought.

Global growth may slow, it may sputter… but IT WILL NOT STOP.

That’s why playing offense is still the best course of action, even if it doesn’t feel good and even if there’s more selling ahead.

I’ll be with you every step of the way.