Becoming a great investor is not easy – especially now.

You will get discouraged. You will want to give up. You will be scared by current market conditions, headlines, the coronavirus situation and more. You will fear missing out on the big rally that’s building (again)

Every investor faces this problem.

There will be days where making money seems like shooting fish in a proverbial barrel… or as impossible as finding a hen’s tooth.

There is a solution (and a great investment choice to go with it).

More importantly, it’s one that’s easy to understand and a great way to start lining up profits right now

What’s happening is scary – modern markets have never faced a biological threat like the coronavirus before. Anybody who says this is like “X” or “Y” is grasping at straws.

Every previously conceived notion about health, wealth, and welfare has been carried out “feet first” in recent weeks, by computers that don’t care one iota about the impact it has on your retirement and your wealth.

“Buy the dip” isn’t working like it used to.

This confuses a lot of folks because they associate that subconsciously with not being able to make money.

The real problem isn’t any of those things but, rather, that investors are scaring themselves silly.

People forget that the markets fluctuate all the time. This downturn happens to be a bit more severe than most, but it’s not an isolated event.

Take a look at this chart.

There have been six major weekly downturns in the S&P 500 since 1986 and, each time, a ripper of a rebound afterwards. We got a little taste of what’s to come on Tuesday when the Dow Jones tacked on nearly 1,000 points in one of the biggest rallies of all time. 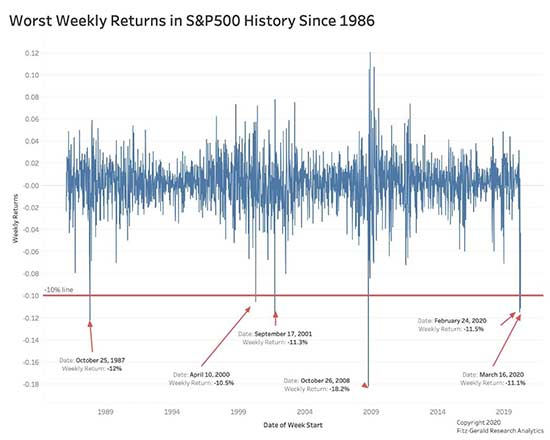 In good markets and in bad… it doesn’t matter.

The world’s savviest and most profitable investors constantly playing offense by putting new money to work in precisely targeted investments that meet their very specific criteria.

Bill Miller, former Chairman of Legg Mason and one of the best value investors ever, for example, remarked on CNBC that he sees what’s happening now as one of the greatest investing opportunities of his “adult lifetime.” He manages more than $2 billion and beat the S&P 500 for 15 consecutive years from 1991 to 2005 when he oversaw more than $70 billion in assets.And, mind you, he was speaking as the circuit breakers stopped trading cold on Wednesday, March 18th.

Jim Rogers… a man who famously led the Quantum Fund to 4,200% returns from 1970 to 1980 at a time when the S&P 500 achieved 47% said simply during an interview with Kitco’s Daniela Cambone that investors “should be buying.”

We haven’t heard from Warren Buffett yet, but there is no doubt in my mind that we’ll see headlines shortly revealing where and what he’s picking up despite terrible market conditions.

Smart Move #2: Buy Stocks with Great Stories and a Clear Path to Profits

Millions of investors are bargain hunting at the moment with the hope that they’ll strike it rich on a big rebound. They might but, odds are, they won’t; many are already having tried and failed to “buy the dip” recently.

What they’re missing is something we talk about all the time.

Not all stocks are equal. You’ve got to buy only those stocks making “must-have” products and services because the “nice-to-haves” may not survive the Corona Crisis.

Apple Inc. (NasdaqGS:AAPL), for example, is unlikely to go out of business. But companies like Twitter Inc, (NYSE:TWTR), J.C. Penney Company Inc. (NYSE:JCP) and Ryanair DAC (OTC:RYAOF) have completely withdrawn guidance for this quarter and the full year ahead.

That tells me executives are bracing for a steep decline and that investors should be leery.

Think about the problem this way.

You can see a real difference between big, scalable tech companies like Amazon.com Inc. (NasdaqGS:AMZN) and global energy companies like Exxon Mobil Corp (NYSE:XOM). The former have fallen to lows hit only a few years ago but the latter are dropping to lows last seen nearly 20 years ago.

Do you really want to put your money in a company because it’s “cheap?”

The question you want to ask yourself is whether or not the company has just been disrupted by short-term conditions and will recover or is potentially being killed off.

[CRUCIAL] Transform Your Life Using This Strategy – 1 Hour a Day, 4 Days a Week

Sitting on the sidelines is exactly what you don’t want to do as an investor. That never works on anything other than an extremely short-term basis.

Instead, consider taking a page from one of the greatest investors of all time, the late Sir John Templeton.

Templeton famously borrowed $10,000 on the eve of WWII and purchased 100 shares of every stock trading on the NYSE for under $1. All but four would turn out to be profitable investments.

Years later, Templeton would go on to become an investing legend by refining and following the same strategy – “buying when others are despondently selling.”

You and I have talked about that many times over the years because investors are still prone to that counterproductive way of thinking, especially now.

Investors who make emotional decisions doom themselves to poor returns, often trailing the returns of the markets by hundreds of percentage points over time, according to research from DALBAR Inc. and others. Those who make logical decisions day after day, on the other hand, become the real champions in the investing world.

People are very focused on airlines, travel stocks, and the like because they’re going to get a bailout or some sort of government accommodation as part of the coronavirus solution.

That’s probably good for a short pop, but the real value and the big profits will come from technology and the digitization that make a recovery possible.

The company’s stock got slammed in conjunction with the broader markets, in a brutal selloff that saw prices drop from a high of $315.70 per share to a low of $183.00 per share.

It’s since regained part of that, and is trading at $249.18 as I type, Tuesday after the regular trading has closed.

I can easily see the company hitting $350 a share a year or two from now when medical providers figure out how critical Nvidia’s medical graphic processing units “GPUs” are to beating the coronavirus when combined with artificial intelligence.

Nvidia has maintained a very strong financial position throughout this crisis with net cash on hand of nearly $9 billion which gives it unparalleled strength to power out of this, pun absolutely intended.

And that, I submit, makes it a great choice if you’re as keen to get a head start on the rebound as I am.