The profits you want ARE right around the corner.

I know that’s hard to believe as the markets come unglued, but hear me out.

Playing offense is always more profitable over time than trying to avoid a downturn. Not sometimes, not at a point in time… always.

For example, I wrote to you recently, on March 6, and suggested you consider The Clorox Company (NYSE:CLX). It’s just hit new all highs of $205.36 as I type. I suggested investors avoid Boeing at all costs in the aftermath of the MAX situation when it was trading at nearly $360, and it broke $100 a share this morning.

People ask me frequently “how I know.”

I simply have two things working for me that every investor needs: a) perspective drawn from 37 years in global markets and b) world class analytics that help me see what could happen next a little more clearly.

I don’t have to do a damn thing except pay attention. And, of course, buy “must have” companies the world can’t live without -something you hear me say a lot.

I want you to have the same advantage.

One of the single most significant problems individual investors at times like the present is the inability to see the bigger picture. Many want to, but they can’t, simply because they’re limited by experience, by access or simply by emotion.

There’s nothing wrong with that.

I wouldn’t, for example, have the foggiest idea what’s needed to conduct brain surgery, even though I understand “how” from having read up on it. I couldn’t understand the ins-and -outs of a crank trigger system and how it eliminates timing inconsistencies related to variables like camshaft twist in my 928S, but I get the idea.

Investing is the same way.

What you want to do is develop the overarching understanding and perspective needed to make money consistently in all kinds of economic conditions even when the wheels seem like they’re coming off the proverbial wagon.

You can literally learn everything else by doing.

The single most important concept is also the toughest to internalize, though.

The markets really do have an upward bias.

That’s why they reward discipline, not a roll of the dice.

This chart, more than any other, is why I know that market angst comes AND goes. It’s also why I take great comfort in the human spirit and why I know we WILL get through the coronavirus!

It’s worth noting that I take a good hard look at this chart every time I start to feel fear creeping in around the edges. It’s my “go to” at SHTF moments.

Many investors just want the pain to stop, me included.

Volatility comes and goes in clusters and you can see that very clearly in this chart. 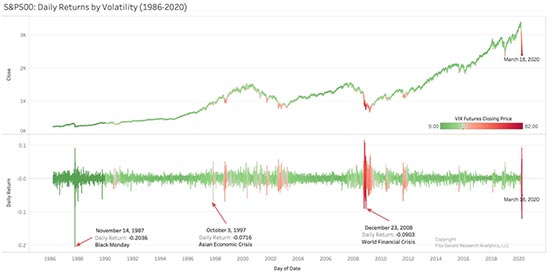 More than any other data set, this is the one that supports buying when others are “despondently” selling, to quote the late Sir John Templeton who was one of the greatest stock pickers and investors of all time.

Templeton famously borrowed $10,000 on the eve of WWII and bought 100 shares of every stock trading on the New York Stock Exchange for under $1. All but four would turn out to be profitable investments. He would go on to refine that philosophy and make so much money that he gave away more than $1 billion before he died.

This chart is also why there is no doubt whatsoever in my mind that what’s happening right now is a “Templeton Moment” for every savvy investor who understands the profit potential that’s being created by such turmoil.

The world’s best companies are being put on sale at once-in-a-lifetime prices. More importantly, they’re not just “cheap” but, rather, extraordinarily valued!

The fact that you, like many investors, may be scared out of your mind is a reinforcing signal. Investor sentiment at times like this is almost always a well documented bullish indicator.

And, finally, here’s what price movement looks like by sector.

This chart is important because it reinforces what a load of hooey Wall Street’s conventional diversification models are. “They” tell you to diversify because not everything moves at once.

Sure as heck looks that way to me.

The ONLY standout here is energy which is being priced like “gas-aggedon” is upon us.

Only we know that’s not true either!

Many of the world’s top scientists think it would take decades to shift away from fossil fuels, even if there’s a perfectly fungible substitute for oil tomorrow.

This herd behavior is precisely why help pioneer the 50-40-10 Model for individual investors seeking a conservative edge over Wall Street’s tired, flawed thinking. It’s based on something called “risk parity” rather than conventional thinking on diversification.

Many individuals have never heard the term but savvy institutional investors have used risk parity oriented models to help run billions of dollars in pension funds, endowments, and hedge funds.

How that played out?

Pretty damn well if I do say so myself.

Here’s a chart showing how the Model 50-40-10 Portfolio has performed since January 1, 2000 – a period that includes the Dot.com Crash, the Global Financial Crisis, and now the Coronavirus pandemic.

As you can see, there are ups and downs just like the S&P 500 Index I’m comparing it to. Every investment involves the risk of loss. There’s just no getting around that.

The key, though is that risk-parity models like this one can allow investors who latch on to this type of thinking to pull far ahead. 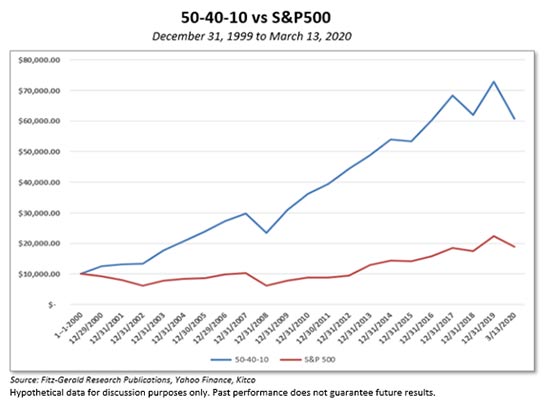 Playing offense right now makes more sense than ever against that backdrop.

Again, I know that’s scary for many investors but it doesn’t have to be. There’s nothing that says you must jump in all at once with everything you own.

In fact, I’d argue that doing so subjects you and your money to unneeded risk. Especially now.

However, buying the world’s best companies is another matter entirely.

So much so, actually, that CNBC’s Jim Cramer just took a page out of my playbook and told viewers to buy only “essential” companies capable of moving beyond the virus. That’s what he calls the “must-have” companies we’ve talked about at Money Map Press for more than a decade.

There is a very real risk that stocks can drop even further as the coronavirus situation deteriorates before it gets better. Many folks who have blindly bought “the dip” in recent weeks are now nursing losses.

Consider changing up your tactics to control risk and avoid that from happening. You can always buy in later when things are clearly on the mend; you’ll miss some of the upside but so what.

This is as much a mental exercise as a financial one.

Buy one share at a time even if you have to as a way of keeping your head in the game. Consider selling puts to generate cash as you “go shopping”.

Or, consider my favorite Total Wealth Tactic, the Lowball Order for a company like … wait for it …

I got more than a few terse comments last year when I suggested Boeing would break $200 on the heels of the 737 Max Crisis and that I wouldn’t revisit the stock until it broke that price point and traded far lower. One gentleman who shall remain nameless even called me “unpatriotic” which is an insult and a half, and a story for another time.

Now, Boeing’s just broken $100 as I type and, I submit, is still wildly overvalued.

Boeing has historically commanded a huge premium which is why it’s constantly traded at multiples far higher than its peer group. Now, that’s vanished as the stock has cratered.

The company’s defense business is still solid, travel isn’t going to vanish permanently, and airlines will order again when the coronavirus is beaten.

$75 dollars a share makes sense to me for two reasons:

Putting an order out there to buy Boeing (or any other stock that interests you) at far lower prices ensures that you know what you’re prepared to pay ahead of time.

What’s more, you don’t have to risk a penny in the meantime while you wait.