Imagine it’s the middle of the night, and you’re strapped into a $50 million dollar aircraft on a pitching carrier deck thousands of miles from home.

You’re intently focused on the “green shirts” who are making ready to throw you over the bow at the push of a button. At the same time, you can’t help but notice the “red jerseys” out of the corner of your eye who are standing next to the crash and recovery gear just in case something goes wrong.

You push your helmet back against the headrest in preparation for the 2 – second journey that will take you from zero to 200 miles per hour and into the air when the catapult fires. Or, into the drink, if you screw up.

Contrary to what most people believe, your heart rate drops.

A final salute, then…

A Top Gun’s Take on Maintaining Control Despite the Coronavirus

Like millions of Americans, I was drawn to Tom Cruise’s character, Maverick, in the 1986 smash hit, Top Gun. The bravado, the fighter pilots, the sense of adventure – I must have played the Kenny Loggins theme song “Danger Zone” a million times as I roared around on my motorcycle.

My eyes quickly ruled out any hope of being a naval aviator, but my dreams never died. They didn’t allow corrected vision in the cockpit back then like they do now.

Long story short, I’ve remained closely tied to the U.S. Naval community ever since, in one way or another, which brings me to today’s column and one of my best friends, Steve.

He’s the real deal: retired USN Commander with more than 20 years of service as a fighter pilot, a Top Gun graduate, and strike commander among other things. Here’s an older shot of him getting ready to launch in Gulf I. 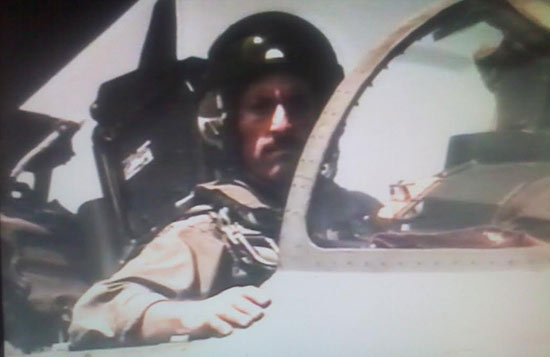 Steve’s a key member of my team, known for his calm demeanor, extreme focus, and mental clarity.

We were talking recently about the coronavirus situation and, specifically, which lessons he’d learned as a fighter pilot would be most applicable to investing and trading successfully through this crisis.

Steve’s take was classic, no nonsense, and straight to the point.

“The biggest problem is a loss of situational awareness,” Steve observed. Meaning that they don’t understand what’s happening around them because they become hyper-focused on one or two things happening right in front of them.

“Launching from the carrier seems stressful to people who haven’t done it, but the real battle begins the moment you leave the deck,” he continued. “You have manage 1,000 different things at once while completing your missing AND finding your way back safely.” It’s a process he likens to finding a postage stamp on the floor of a gymnasium while running at full speed with one eye closed.

Interestingly, Steve called out recent headlines related to panic-buying toilet paper and knee-jerk selling as prime examples of people who just aren’t thinking about the bigger picture like they should be.

We had a good laugh when I pointed out that didn’t fit the bravado associated with fighter aviators but Steve quickly noted that’s Hollywood.

Turns out most investors – like fighter pilots – get into trouble when they let their fears change their decision process.

“Contrary to what people think, nothing happens in an F-14 without a checklist… nothing.” The irony, says Steve, is that people “instinctively focus on not losing money when making it is actually the objective.”

Times like the present reinforce the need to turn every short-term price squiggle into an opportunity, just the way a fighter pilot is constantly maneuvering to have an advantage over the enemy.

“Being scared is normal,” says Steve. “But losing control over how you perceive your environment is the real problem. Checklists, like proven investment tactics, exist because they work, not just for kicks and giggles.”

“This is deceptive,” he noted. “The vast majority of people want to succeed but, in doing so, overestimate their ability to recover from a crisis like this one. So, they spiral out of control and, unfortunately meet an undesirable end that was entirely preventable, had they followed procedures and training.”

I’ve seen similar behavior countless times over the years from investors who think they’re playing it safe by going to the sidelines, only to realize too late that they’ve actually created more risk by doing so. The fact that so many sold everything during the Global Financial Crisis and never got back in is one of the most glaring examples.

Which brings me to Steve’s final point.

Steve leaned in and said succinctly, “Focus is everything, and as long as you have that, you will adapt to changing conditions, you will remain ‘mission oriented,’ and, odds are, you will win.”

Speaking of which, I’m particularly focused on Constellation Brands Inc. (NYSE:STZ) at the moment.

[BREAKING] This New Prototype Could Change the Course of Medicine Forever

The company’s stock got pounded when the virus hit because people believed sales would take a hit as restaurants and bars closed in the face of coronavirus prevention measures.

What many investors don’t realize is that roughly 90% of Constellation’s sales are geared for “at-home consumption.” That’s key because people simply drink more when they’re stressed… or confined.

The company just “beat” on Q4 top and bottom line numbers with revenue of $1.9 billion and EPS of $2.06 per share. It’s trading at $165 or so as I type, and the company received an upgrade from UBS which noted that Constellation sells what consumers “know.”

That’s key because I think the real driver going forward will be a permanent change in social behavior driven by consumers who are now acutely aware of the need to social distance and who prefer to remain outside or party at home, rather than bars and restaurants.

$225 a share 12 months from now doesn’t seem unreasonable, even though the company declined to provide guidance based on uncertainties associated with the coronavirus. There’s nothing sophisticated guiding my analysis, incidentally.

I simply believe the “mission” continues.