Everyone Has a Plan Until They Get Punched in the Mouth: What You Need to Do When the Fed Realizes It’s in Trouble

Just because the master manipulators at the Federal Reserve say they’re going to backstop U.S. bond markets, as well as debt on corporate balance sheets, doesn’t mean they can.

It’s true they’re managing easily enough in the early rounds of the fight to save debt markets, corporations, and the economy, but they’re going to have to do more, including the impossible, when their real opponent comes out swinging.

As Mike Tyson famously said of Evander Holyfield’s fight tactics to beat him in their first bout, “Everyone has a plan until they get punched in the mouth.”

Here’s how the Fed’s managed the early rounds in its bond market fight, what’s going to happen eventually, and what you should do when Fed realizes it’s bitten off more than it can chew…

To its credit, the Federal Reserve’s plan to save the stock market from imploding when it got hammered by the coronavirus was to backstop all bonds and everything related to debt and debt markets, where borrowing was coming to a dead stop as it did in the Financial Crisis.

Since the Fed has no mandate to buy stocks, it couldn’t save the stock market from crashing by buying equities. Although it did buy equities in the form of “credit” ETFs and set a new precedent in doing so.

The shortest, fastest route to shore up imploding equities was to backstop every kind of debt instrument in sight, which, if investors saw them being unconditionally supported, would signal it was safe to jump back into beaten-down stocks.

Equity markets are initially always more important in a financial crisis than bond markets. That’s because equities always fall faster than bonds, and when they crash, they drive news headlines, squash investor and consumer confidence, and more directly and immediately impact Americans’ savings, retirement portfolios, pensions, and standards of living than falling bond prices do.

And, as a company’s equity value declines, it exposes leverage on its balance sheet, impacts corporate liquidity and debt-to-equity coverage ratios. If equity markets fall, bond markets won’t be far behind.

In the final analysis, bonds and debt markets matter more than stocks.

So, by backstopping debt markets, especially where corporations borrow directly, the Fed quickly becalmed equity markets and signaled an all-hands-on-deck “risk on” riot.

As equities soared off their March lows, bond investors tepidly at first, but with exponentially rising enthusiasm watching stocks skyrocket, flooded markets with buy orders to pick up depressed bond issues that not only were being backstopped by the Fed, were simultaneously being buttressed by buoyant equity markets.

It’s All Good Until It Isn’t

Of course, there’s a problem with all the backstopping debt markets have been getting. There’s no meaningful risk premium being priced into new debt issuance and bonds in general, on account of investors believing the Fed’s going to be there to pump up asset prices.

But, there’s a monumental difference between liquidity, which is what the Fed’s been supplying, and solvency, which is the degree to which the current assets of a company exceed its current liabilities.

For example, if you owe a million dollars and can’t pay interest on what you owe because your assets, your means of producing income, have suddenly disappeared or are severely impaired, and the Fed offers you help paying them, or deferring them, you’ll take it and survive in the short-term. But, if your income doesn’t rebound, when the new short-term borrowing you owe gets tacked on to the rest of what you still owe, increasing your long-term liabilities, you’re likely to become insolvent and default on your debt.

The likelihood of default increases if your income declines or if interest rates start rising.

That’s been happening in the corporate world for years.

Companies that have managed to roll over debt as the Fed’s consistently lowered rates, while their revenues decline, so-called zombie companies, are now being joined by COVID-19 impacted companies, mostly surviving because Fed liquidity spigots slaked short-term liquidity needs.

With rates having been manipulated down to record lows, and bond investors willing to take on any and all risk believing the Fed has them covered, there’s not much room in the future for the rising number of zombie companies to survive if they can’t generate enough revenue to make their debt service, or if rates rise and the cost of rolling over their debt finishes them off.

Leverage on Top of Leverage

In the second quarter of 2020 the debt to EBITDA ratio (earnings before interest taxes depreciation and amortization) for high-grade companies was 3.53, according to Bloomberg Barclays. That’s the highest it’s been since 1998 and 33% higher than the 20-year average of 2.65.

The average junk rated company now has debt levels three times higher than what the Fed warned companies was excessive in 2013, and again in 2016. They’ve since dropped their warnings.

With corporate earnings across the board down by one-third in the second quarter, while companies piled on debt to maintain liquidity and stave off insolvency, leverage is rising rapidly.

Yet, bond issuance continues, because it must for some firms, and because it’s cheap to borrow.

U.S. corporate debt issuance is annualizing at a record rate of $2.15 trillion in 2020.

Low rates and investors’ sense the Fed’s taking over default risk by taking on credit risk will only encourage more issuance.

So far, it’s all been good, because investors have done the bulk of the Fed’s work for them, buying up new issues and secondary issues, elevating bond markets while tamping down yields with their speculative buying of everything from investment grade bonds to credit ETFs.

Getting Punched in the Mouth

Like I said, the Fed’s fight plan is working so far, but it hasn’t been punched in the mouth, yet.

If corporate revenues don’t rebound as advertised or if interest rates start rising, the Fed and bond investors are in big trouble.

Revenues look like they’re rebounding, especially coming off the mat they’d been knocked down to; but will they continue rising into the third and fourth quarter of 2020, and into 2021?

No one knows. Just because large percentage gains from low levels look promising for corporate revenues, doesn’t guarantee anything. The only possible guarantee is predicated on a successful COVID-19 vaccine.

If revenues don’t trend higher or backslide, corporate borrowers are going to feel the pain of their leverage and debt service.

While the usual culprit pushing rates higher, inflation and the Fed raising rates to mitigate its impact on the economy, isn’t on investors’ minds, it could be.

Of course, the Fed’s not going to raise rates even if inflation measures flare, Chairman Powell just said so in his speech from the virtual Jackson Hole central bankers’ conclave.

That’s how rates could start rising.

It wouldn’t take much for even a small back-up in rates to panic investors into taking profits and selling to cut potential losses, since bond investors are always leveraged to increase their returns.

The Fed’s plan to save the stock market by saving bond markets is equivalent to being punched in the mouth by Mike Tyson, it’s a plan that worked before and everyone knows how it goes.

However, Iron Mike punching Evander Holyfield in the mouth didn’t stop Holyfield from executing his plan and pummeling Tyson in their first bout, which Holyfield won. To the point, you may remember in their second showdown, when a frustrated, some say crazy Tyson bit off a piece of Holyfield’s ear, causing him to be disqualified and handing Holyfield the win.

If the Fed’s bitten off more than it can chew, we’ll see it in how TLT, the 20+ Year Treasury Bond iShares ETF; LQD and JNK trade; your three best bond bellwethers.

Here’s what they look like and levels to watch to know when the Fed’s bitten off more than it can chew, in which case, short these ETFs and make sure you’ve got stop-loss orders down on your stock positions: 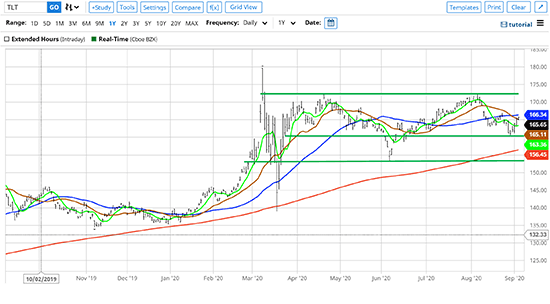 The dark green horizontal lines are support and resistance lines. The middle one here on TLT is at $160. If TLT can’t hold that support level, start paring your stock positions and short TLT. If TLT breaks below its lower support at $153, you’re going to be glad you shorted it and took profits on your stocks. 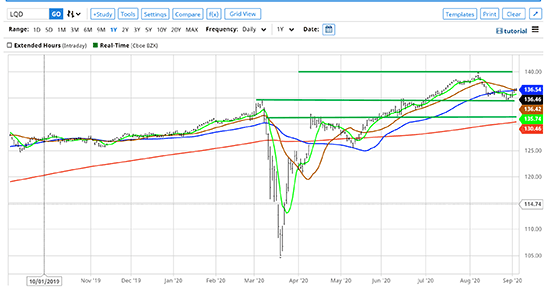 On LQD support comes in at $134.50. If LQD can’t hold that level, short it and start taking profits on your stock positions. If LQD breaks below its lower support at $131, you’ll be glad you did. 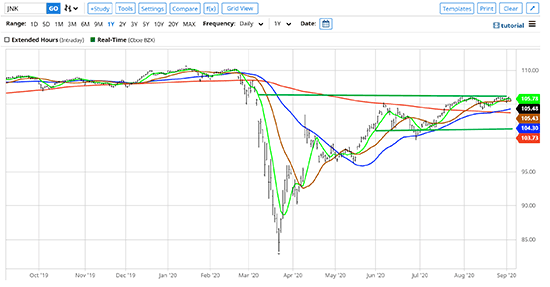 Support on JNK, the junk bond ETF, is at $101. JNK’s trading a lot higher and looks like it can break out of resistance at $106.30 and go higher, that’s because of all the speculators in high yield bonds and because the Fed’s buying shares of JNK. But, if JNK backtracks and heads down to test its support, it’s a sure sign the Fed’s losing control of rates, and you better take your profits everywhere, in your stock positions and any bond positions you have.

Keep your eyes on these.

2 Responses to Everyone Has a Plan Until They Get Punched in the Mouth: What You Need to Do When the Fed Realizes It’s in Trouble