The Federal Reserve: Not the All-Powerful Oz You May Think It Is

The privately owned and controlled Federal Reserve System, America’s so-called central bank, is more powerful than the U.S. government. In fact, it controls our government by financing particularly Fed-friendly governments, as only it can.

The Fed’s more powerful than all the banks and businesses in the economy, combined. In fact, it controls them and the economy by manipulating interest rates under explicit authority granted by, you guessed it, Congress to, “promote effectively the goals of maximum employment, stable prices, and moderate long-term interest rates.”

The Fed is using their power for good, not evil, at least that’s what they’ll tell you. They’re “protecting” your money by playing with the inflation rate and printing money with reckless abandon.

It’ll protect you all right, at least until the bubble it’s creating pops, and you’re left free falling without a parachute.

It’s the most successful fraud ever perpetrated, and knowing the truth can help you navigate the markets when everything goes south.

The inflation target’s been 2% since the Financial Crisis spawned the Great Recession. We’ve never come close to 2%, not by a longshot, and the Fed’s known all along we never would, that’s why it “strategically” picked 2%.

Forget the fraud in that red herring, that’s not important, what’s important is that printing money, whether in successive QE cloaks or other overt money hosing efforts, inflated financial assets.

That’s what matters to us. Now it’s about our money and our future.

So, expect a further “melt-up.”

Until, that it, the bubble the Fed’s created and keeps inflating, bursts.

Grab Profits on the Way Down

Don’t get out of anything. Ride the rising tide, because no one knows how long the asset bubbles in bonds and equities will go on.

When they get so stretched and distorted that they’re in danger of exploding, you’ll see it in the form of interest rates rising in the face of the Fed trying to keep them down.

That’s when it’s game over.

That’s your warning to take profits and run in the opposite direction.

Or, you could play the downside, and make cash while the markets crumble. Start selling short, buying puts, selling puts, whatever it takes. It’ll be raining cash from the downside, and if you can grab it early, you can make a hefty sum while fleeing with your wealth.

My colleague, Tom Gentile, specializes in put selling, and he’s saved me a bunch of passes to send my Total Wealth subscribers to his Master Class, where he lays out the fastest, easiest way to make cash on mega-caps. You can access this class right here, and Tom will get you ready for anything as soon as you sign up.

No matter how you choose to prepare, make sure you’re ride the tide higher, higher, higher and be prepared to have it pullback – and then sell like crazy.

What to Watch: How Know Exactly When the Storm Will Hit

The chart below is what a lot of investors and hedgers and banks and the Fed’s watching, because the Fed’s buying shares of this bond ETF to hold up bond prices and keep interest rates from rising.

If LQD breaks down, despite the Fed supporting it, it’s game over and time to take cover. 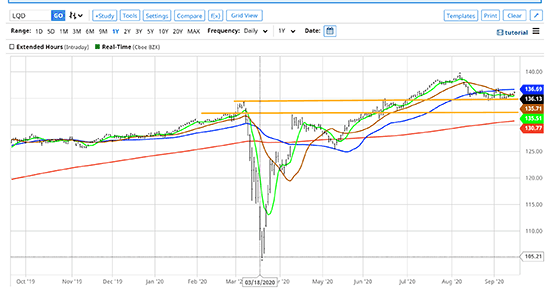 You can see how LQD spiked in early April when the Fed announced it would buy shares in the ETF to support bond prices, and how it has risen to new highs over the year.

The upper brown line at $135 is LQD’s first support, if LQD falls below that, that is your early warning.

If LQD falls below its second support at $132.50, that’s your chance to take some, if not most, of your profits in bonds and stocks, off the table.

As powerful as the Fed is, it is not the all-powerful Oz most people think it is. Inflated asset bubbles could explode in their faces, and ours, simply because markets will always struggle to be free, which includes repricing themselves if they have to.

2 Responses to The Federal Reserve: Not the All-Powerful Oz You May Think It Is