The green revolution is, sadly, not today’s reality.

The media would have you believe otherwise.

Yet that idea fooled even the biggest Wall Street traders and hedge funds in recent weeks.

Take a look at this chart over here… 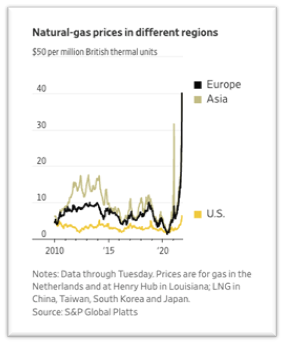 Demand is skyrocketing while production is stalling.

But did prices need to skyrocket 400%?

No. They didn’t. That was a product of the big traders.

Which is perfect – because we’ll make their mistake our path to profits.

Fossil fuels still rule the world, and demand for them will continue to rise. At least 40% of the world’s electrical grids are dependent on fossil fuels, gearing back up in recent months to satisfy the needs of rebounding tourism and commercial industries.

But, there have been major snarls keeping up with that demand. Stalled production and supply chain bottlenecks for oil, coal, and natural gas has left Europe and Asia woefully short on supply to keep their citizens’ lights on and, more importantly, their furnaces running.

And with winter well on its way, the likelihood of power cuts become more of a certainty every day.

Let me lay out what happened for you…

Then we’ll get into what’s going to happen…

And then you’ll receive three plays to jump on today.

Now, like with so much that has happened this year, it all started with lockdown.

One year ago, energy demand dropped. With nowhere to go and so little to do that was considered safe, people stayed home. All the major energy consumers in the U.S. – factories, public transit, shopping malls – adjust hours or closed completely.

A gallon of gas averaged $2.17 last year, a whole dollar less than it is today.

On a global scale, demand fell an average of 15% to 20%, so producers reacted accordingly. Fossil fuel exploration came to a standstill and so did a lot of production. There was no demand, so why bother with supply?

Investing trends followed suit, moving away from oil company stocks in favor of environment, social, governance (ESG) focused investing. Oil stocks slid and EV stocks became fashionable – I would know, I was a part of this very trend.

For the past 12 years, there have been price differences between natural gas in the U.S. and in Europe. Hedge funds and, moreover, giant commodity traders have been playing this difference with a low-risk reversion spread trade.

So, when the price of natural gas fell in the U.S. has demand tanked, U.S. natural gas futures were bought up and European futures were shorted. The expectation was that natural gas prices would return to the average price – that’s why the trade profits.

But that’s not what happened.

As the price of gas in the UK and across Europe began to rise last February, traders added to their reversion trade, only to watch their shorted futures rocket to new heights. Summertime hit the northern hemisphere. Travel and tourism were in full swing and demand for fuel spiked.

To put things into perspective for you, let’s look at a few numbers.

Last October, European natural gas was trading for $11.80 per megawatt-hour (MWh). By February, it was up five dollars. By May, it hit $25.23. Two months later, it doubled to $40. Now, at the time of writing, natural gas is trading for $85 per MWh and is still climbing.

Since January, natural gas prices have risen 400%, making the 66% price bump of oil in the U.S. these past ten months look like peanuts.

The root cause being all the short-covering these hedge funds and commodity traders have done. When placing their trades, they failed to consider a resurgence of demand in a more natural gas dependent Europe when lockdown eased, put their money in the wrong places, and have paid for it.

Giant commodity firms like Glencore and Gunvor Group, Mercuria Energy Group, and Vitol, who were all into the reversion trade to the collective tune of billions of dollars, and who all had massive margin calls the last few weeks, have been covering their shorts as they’re loathed to put up even more margin. And that’s what’s causing the dramatic spikes.

Eventually the short-covering will run its course and sky-high cash and futures prices will come down.

Just not anywhere close to where they were last October, or even May this year, or July levels. Prices will stay high for natural gas, oil, and even coal, because demand isn’t shrinking, it’s growing, and supplies are so short on account of exploration and production facilities being shut for so long.

But while these big traders are covering their asses, inflating prices, it’s left an opening for us small traders to break into fossil fuels in a major way.

But fool me twice?

But if you’re going to buy anything today, make it Cheniere Energy Partners L.P. (NYSE:CQP).

Besides sporting a profit margin of almost 15% and a 6.28% dividend yield, this American company owns and operates all arms of its supply chain, which is also utilized by other natural gas companies.

As demand for gas rises and prices rise to meet it, more natural gas needs to be liquified, stored, and shipped where it’s needed. Cheniere has all three of those steps covered. At its Sabine Pass terminal located on the Gulf Coast, they receive 1.5 billion cubic feet of natural gas from the Transcontinental Gas Pipeline Corporation (Transco), Texas Eastern Gas Transmission (TETCO), Trunkline Gas Company (Trunkline,) and the Natural Gas Pipeline Company of America.

From there, the gas is processed and shipped out of two marine berths that accommodate tankers.

All benefits and profits on the natural gas price explosion, especially if natural gas supplies are shipped over seas to relieve shortages abroad, stay in house.

The future of this company is bright, so I say Cheniere Energy Partners L.P. is the play here.