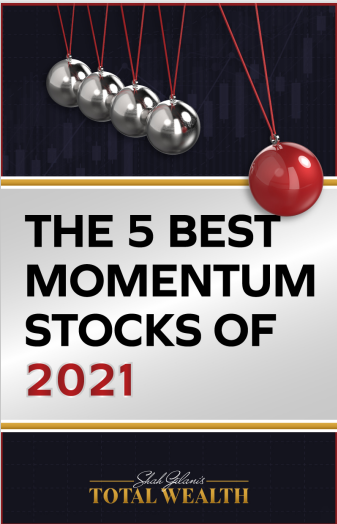 The way capital markets operate has changed and continues to change, and it’s further altering how we trade and invest.

Amidst all those changes, the one constant thing is what subscribers ask me: What are this year’s best stocks going to be?

My answer is this – 2021 is going to be all about momentum, which doesn’t mean great stocks aren’t going to have minor pullbacks or minor bouts of profit-taking.

But the ones with great forward momentum will continue to march higher as we recover from the pandemic, the flash depression, and even the somewhat alarming spike in the U.S. Treasury 10-year note’s yield.

In this report, I’ve compiled five stocks that I think are going to be foundational holdings this year because of their proven momentum and their forward-momentum potential.

That’s why now’s the prime time to get in on them – before they rocket to the sky and take your profit potential with them.

Even with COVID-19 wreaking havoc on some portions of the global economy, there are still some global consumer brands that just keep on performing. One of my favorites is NKE.

Nike is one of the most recognizable brands in the world, and they’re poised to come roaring back, especially with economies around the world loosening up restrictions on shopping, public gatherings, and playing and watching sports.

Given everything the world has been through this past year, it’s no surprise that NKE’s revenue and net income were both down last year, but the company beat analyst estimates over the last two fiscal quarters, with a 102.1% beat for fiscal Q1 2021 and a 25.80% beat for the fiscal Q2 2021 quarter. Diluted earnings per share for the quarter was $0.78, up 11% year over year.

In fiscal Q2 2021, the company reported revenues of $11.2 billion, which represents a 9% increase compared to the previous year, led by Greater China reported revenue growth of 24%.

Fiscal third-quarter earnings just came out and weren’t what investors hoped for, but definitely what I like to see – a quick downdraft and a prime entry level. Revenue rose 3% to $10.4 billion, analysts were looking for $11 billion. That doesn’t bother me in the least; everyone’s having supply-chain issues and shipping issues. Nike’s are less of the former and more of the latter, which will get cleaned up quickly as the world starts moving again. Digital sales were up 59%, which is fabulous. The dip here is a gift, so grab it while you can.

And Nike’s not the only “gift” in the markets this year. 2021 could be a gold mine for Americans. I’m showing my subscribers exactly which stocks to buy and which to sell. But you’re getting it all for free – no sign-up or credit card required. Prices, tickers, and over 30 company names will be coming your way fast. It’s all right here.

Next on our list is one of the fastest-growing trends in the world: digital payments.

Total transaction value in the digital payments segment reached $6.6 trillion globally in 2021. $1.26 trillion of that total was spent by people living in the U.S., making the United States the second-largest contributor to digital payments in the world, according to data presented by Finaria.it.

This is a big market, and my favorite company in this space, PYPL, is taking a huge slice of that pie.

Founded in 1998 and headquartered in San Jose, California, the company operates as a technology platform and digital payments company that enables digital and mobile payments on behalf of consumers and merchants worldwide. Its payment solutions include PayPal, PayPal Credit, Braintree, Venmo, Xoom, and iZettle products.

The company added 15.2 million net new active accounts in Q3 2020, which represented a year-over-year increase of 55%. In total, the company finished Q3 2020 with 361 million users, and it expects to have added 70 million more active accounts when it reports full-year 2020 results. For the quarter (Q3 2020), the company processed more than four billion payment transactions with a total payment value of $427 billion.

Those are all really big numbers, and it’s showing up in the company’s financials.

For Q3 2020, the company reported revenue and non-GAAP earnings of $5.46 billion and $1.07 per share, which represented year-over-year increases of 25% (spot and FX-neutral) and 41%. Incidentally, the company’s Q3 revenue growth represents the highest in the company’s history!

It’s also worth noting that PYPL is now set up to store Bitcoin. You can’t pay for anything using Bitcoin from your PayPal account, but you can store Bitcoin there, as opposed to having to use the Coinbase platform to store it. I think that’s a huge move forward. It’s probably just a matter of time before PYPL will accommodate Bitcoin being accepted as a means of payment on its platforms.

Meantime, in Q4 PYPL gained 16 million new accounts, bringing its total to 377 million, continuing its momentum. A 39% jump in Q4 transaction volume helped the company earn $1.08 a share on $6.12 billion in revenue, easily topping analysts’ estimates of $1.00 per share on $6.01 billion.

The dip in PYPL, because of the spike in the 10-year Treasury note’s yield is another great buy-in opportunity.

RIO, in their own words, produces “materials essential to human progress,” and they aren’t kidding either. This is a company that specializes in mining the copper you’ll find in the wiring of the smartphone or computer you’re reading this on, and all the electricity-conducting infrastructure around the world.

The pandemic forced tons of people to work from home, and a lot of companies are making that a permanent change, leaving office parks and high rises behind them in favor of the home office. To make that work for the long term, functioning electronics is a critical need. And with demand for computers and laptops skyrocketing, and everything electric, so is the demand for copper.

And it’s RIO who’s stepping up to meet that demand.

Plans for a new mine have been set in motion, and anticipation for it has been huge. Since the announcement of the “Resolution” mine, and RIO’s promise to respect and maintain sacred Apache land near the mine’s location, their stock increased 55%.

And now’s the best time to buy. The United States government is expected to grant RIO the land rights they’ve requested in a land swap this year. Once they start digging the mine shafts and bringing out that copper, I wouldn’t be surprised if RIO’s stock popped even more.

The mine would provide a quarter of the copper used annually in the United States to make wires, pipes, personal computers, and wind turbines. With demand for copper remaining strong in the U.S. and China, the momentum of this stock won’t slow an inch.

Melbourne, Australia-based RIO just reported its best annual earnings since 2011 and declared a record dividend payout. The 20% jump in annual profit on a surge in prices for raw materials bodes well for the company and the stock for the rest of 2021 and probably well beyond.

And believe it or not, which I find a little hard to believe, RIO dipped recently, giving us another great entry level to load up on one of my favorite infrastructure and momentum picks.

TGT is one we are all familiar with at this point. This is one of the fastest-growing retailers in the United States, seeing nearly a 100% increase in share value since the lockdown started on March 23. When other companies saw a massive dip, Target has consistently been on the up and up.

Throughout the pandemic, TGT has held their own against e-shopping giants like Amazon.com Inc. (NasdaqGS:AMZN) because, unlike too many other brick-and-mortar stores, they embraced e-commerce and continue to adapt with the changing times.

In fact, they set new trends.

According to Elastic Path, 75% of consumers expect all brands to offer same-day delivery or curbside pickup within the next year. Target had some form of “Drive-Up” available back in 2018, and their same-day delivery service was announced in mid-June of 2019. They’ve been way ahead of the curve and were ready to serve customers as soon as lockdowns began.

While keeping up with the Joneses (Walmart, Amazon) on the digital front, TGT, very effectively chasing Walmart, has not given up on their physical stores. On the contrary, they plan to breathe new life into physical locations across the country to capitalize on the death of American malls.

Last November, TGT teamed up with Ulta Beauty Inc. (NasdaqGS:ULTA) to begin the construction of “shop-in-shop” destinations in late 2021, meaning you can expect prestige make-up brands to be sold in Ulta shops inside your local Target store, further establishing TGT as a one-stop shop for almost anything and everything.

Target posted stronger than expected fourth-quarter earnings in their March report, citing surging digital traffic over the holiday period and same-store sales that handily topped analysts’ forecasts. Adjusted earnings for the three months ending in January at $2.67 per share were 58% higher than the previous year and well ahead of analysts’ estimates of $2.54. Group revenue rose a whopping 21.1% to $28.34 billion, topping estimates of $27.42 billion.

All Target’s numbers are indicative of the kind of momentum that will keep TGT on a tear.

YUM, the smallest stock on today’s hot momentum list isn’t one to be overlooked. True to its name, the company operates some of the most beloved American restaurant franchises: KFC, Pizza Hut, Taco Bell, and Habit Burger Grill.

The restaurant industry has been hit hard by the pervasive lockdown here in the States, but nothing stirs up ingenuity quite like hardship. Around this time last year, YUM acquired Habit Burger Grill and expanded their fast-food empire to 50,000 restaurants around the world. Now, their CEO is working to reinvent the dining experience.

Again and again, I’ve talked about the work-from-home trend, but work isn’t the only thing moving home. For a lot of people, maybe even including yourself, many of the dining experiences to be had in 2020 took place at the family dinner table. YUM is working to ensure delivery and pick-up from their restaurants is as smooth as possible to ride this wave.

Currently, at least 34,000 of YUM’s restaurants offer delivery, and they are working to increase that number. YUM’s also declared they’ll increase the number of drive-thru lanes and are setting their sights on dine-in services to capitalize on re-openings around the world.

YUM reported fourth-quarter results in February and topped analysts’ estimates by a good margin. Earnings came in at $1.15 per share on revenue of $1.743 billion as opposed to consensus estimates for $1.01 per share on revenue of $1.719 billion. While revenue declined by 3% from a year ago, not a lot of analysts noticed 2019’s same period had an extra week of revenue calculated in. Digital sales rose a healthy 45% to $17 billion on full-year accounting, which makes the point that when the world gets back to normal, YUM will serve up more profits from digital as restaurants open up and more locations are added worldwide.

YUM’s a little sideways now, but that’s a consolidation phase we’re seeing, and I expect the stock to catch fire as we head into summer.

So catch this stock while it’s still so cheap. It can only go up from here.

Are You Holding Any of These Toxic Stocks?

Knowing what to consider buying is just half the battle. It’s equally important to make sure you’re not holding onto any portfolio-ruining stocks.

That’s why, in my stock-picking lightning round event, I name 12 stocks I wouldn’t touch with a 10-foot pole.

It costs you nothing to see these stocks, but it could cost you everything to ignore this warning.