Banks Are the Economy's and the Market's Bellwether: How to Read Them and Play Them | Total Wealth Research
Main Menu

Banks Are the Economy’s and the Market’s Bellwether: How to Read Them and Play Them

To make money in the stock market investors need to know how bad the recession’s going to be and how the market’s going to react to economic conditions.

One surefire way to gauge what’s going on in the economy and gauge what the market thinks about economic prospects, as well as divine the market’s direction, is by watching bank stocks.

Banks are a bellwether for the economy and the market.

Here’s why banks are a good economic indicator, how to read them, and how to play them.

Banks are the lifeblood of capitalism and the economy.

They’re generally safe repositories where individuals and businesses park their cash, and act as transfer agents facilitating checking, the paper and electronic movement of money.

Banks also lend out customer deposits as loans, facilitating both investment and consumption across the economy.

Besides making an interest rate spread on the loans they make (known as NIM, or net interest margin) by using inexpensive deposits and borrowing money short-term at low interest rates, then lending at higher rates of interest, banks trade for themselves.

In addition to making loans, banks leverage their capital and assets, for example, by using their assets as collateral to borrow cheaply in the fed funds market to buy higher yielding U.S. Treasuries.

Banks also originate mortgages and other loan products, package them into securities, sell them, invest in them, and trade them.

They also create “forward” currency contracts for their clients and trade actively in currency markets.

And many banks have equity and securities trading divisions, known as broker-dealers.

Banks are the hub of the giant wheel of commerce, of capitalism, of the American economy.

Because they’re so important, banks are regulated by an array of authorities, including the Federal Reserve. Regulators mandate how much capital banks must maintain, what level of “reserves” they must have on hand and monitor how they’ll hold up in distressed times.

Every year the country’s big banks go through “stress tests” where they’re subject to measuring how they’ll stand up to economic and market stresses, how their capital will be impacted, whether they’ll be able to maintain adequate “reserves” and liquidity to continue operating smoothly.

Last year all the too-big-to-fail banks were stress-tested to see how they’d hold up if the stock market fell 50%, unemployment shot up to 10%, and the economy and companies faced attendant dislocations.

That’s what the Fed called a “severely adverse scenario.”

The U.S. is in the beginning stages of what could be a long, severely adverse scenario.

With the shock of an unimagined pandemic, the stock market fell 35%, just shy of a severely adverse drop of 50%. Fortunately, there’s been a strong bounce off the market’s March 23, 2020 lows.

As far as a severely adverse standard goes, the unemployment rate jumping 471% in four weeks, as more than 34 million Americans, 21% of the workforce, filed for unemployment benefits in the same timeframe, nothing economically in the history of the U.S. has been more severe or more adverse.

Bank stocks, after enjoying a long bull market for the economy, for the market and for financials, crashed along with the rest of the market.

What are bank stocks telling us?

They’re telling us, literally, that they’re increasing loan loss reserves, money they set aside to cover expected losses when loans, including credit card receivables, consumer loans, real estate, energy and retail loans, turn from delinquent to non-performing, to distressed, to being written off.

JPMorgan Chase, the nation’s largest bank, by assets, reported net earnings of $0.78, as opposed to analysts’ estimates for earnings to register $1.84 per share. The giant bank cited the addition of $6.793 billion to its pile of loan loss provisions as the reason for the plunge in earnings.

And that’s only what the banks put aside to cover losses they see currently.

When banks are making money and lowering the reserves they set aside to cover expected losses, it’s a clear indicator of a growing economy, of healthy consumer borrowing, of companies expanding and increasing their profitability.

I touched on this yesterday during Money Morning’s Markets Live, and I’ll be on again at 3:45 today – if you have any questions, make sure to tune in, just click here.

Looking at how bank stocks fell and bounced meekly is a sure sign their future prospects are in question.

As a bellwether, bank stocks are warning investors there’s more economic pain ahead.

Investors will sell bank stocks again and again as more bad news comes out about the economy. And more bad news seems to be coming out every day.

Looking at the big banks’ stocks graphically, it’s easy to see they are almost identical copies of each other’s graphs. 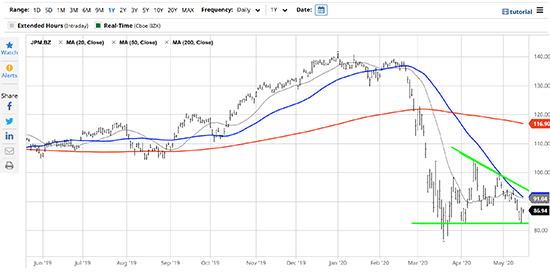 Almost all the other big banks’ stock graphs look like JPMorgan Chase’s.

Breaking through “support” will attract a lot of attention and a lot of traders will see any breach of support as an opportunity to sell JPMorgan and other banks, as they reflect hard times for their customers, the economy, and themselves.

One Response to Banks Are the Economy’s and the Market’s Bellwether: How to Read Them and Play Them