Thanks to This New Drug, Moderna and its Peers are “Yesterday’s News”

Moderna Inc. (Nasdaq: MRNA) and BioNTech SE (Nasdaq: BNTX) were two of the big stars of the COVID-19 Pandemic.

But those two biotechs – and other players like Merck & Co. (NYSE: MRK) – are scrambling to find that “Next Big Thing” to stay relevant, or get hot again, in the post-peak-pandemic world.

But I’m here to deliver some very bad news: None of these three are going to pull this off.

And that makes them “stocks to avoid.”

There’s a fourth company – one not on this mini list – that’s leapfrogging the pack. It’s a stock you want to buy now and tuck away as a core holding – because I see it as a long-term winner.

Let me spend today sharing the tale of this mystery winner stock – while at the same time protecting you by getting you to steer clear of the “high-risk trio.”

Two Losers and the Runner-Up

Let me begin with a blunt statement a lot of investors may not be happy to hear – though it’s something I believe to my core.

The fact is that Moderna is a one trick pony . Until it comes up with another homerun drug, its stock is going to continue its journey back to earth after a run up of 355%.

We’re talking about a stock that skyrocketed from $109 at the end of 2020 to a high of $497 on Aug. 10. Since then, however, it’s absolutely collapsed, and trading way below its 200-day moving average of $254. Moderna is not a great company – it lacks real prospects, meaning its stock is a lousy long-term play.

For BioNTech, it’s pretty much the same story. The company may be more diversified with a better pipeline of drugs, but its shares rode the same rocket as Moderna, and like that company it lacks a “COVID encore.”

At the end of 2020, you could have picked up BioNTech for around $80. By Aug. 10, it also skyrocketed to $464. Since then, BNXT’s experienced the same freefall as Moderna. It’s now just above its 200-day moving average of $224. But it’s well below all the other important moving averages, and the shares are just lingering around $265. And like Moderna, it lacks the prospects needed to jump-start its shares. 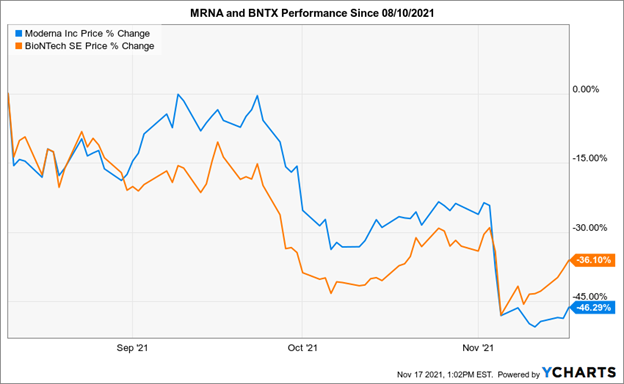 And who knows if either will ever bounce back in light of their biggest competition rolling out the drug of the century: a pill that kills COVID-19.

Even here there are “haves” and “have nots.”

Merck has a pill it says is a COVID killer. But, as we’ll see in a second, it’s shaping up to be an “also-ran” drug.

Merck is playing second-fiddle to another company – the stock we’re recommending here today.

And the Winner Is …

That company is Pfizer Inc. (NYSE: PFE), which revealed early this month that it’s seeking U.S. Food and Drug Administration approval for its antiviral pill Paxlovid.

Merck’s has a rival offering, Molnupiravir. But studies so far show the Merck pill reduces hospitalizations by only 50%.

Jeffries & Co. the investment bank that follows all the Big Pharma firms, says Pfizer’s pill could tack another $10 billion a year onto Pfizer’s current yearly revenue of $69 billion.

Pfizer hitched a ride on the same rocket ship that launched Moderna and BTNX to orbit, going from $37 at the end of 2020 to a high of $52 on Aug. 18. But unlike Moderna and BioNTech, which each stalled out after flying a little too close to the sun, PFE drifted back down to $41 – then rebounded and shot back up toward its high once again.

Pfizer is now trading well above all its important moving averages and, at $49.92, is only a hair’s breadth away from making new highs.

And there’s a kicker: Pfizer sports a tidy dividend yield of 3.14%. Which, as I always say, is a beautiful thing when a company pays you to own its shares.

Pfizer is a “Buy” right now and a long-term hold for as long as there are viruses and diseases out there to battle.

One reply on “Thanks to This New Drug, Moderna and its Peers are “Yesterday’s News””