The ARKK of a Diver: The Rise and Fall of Cathie Wood and ARK Innovation ETF

Arc of a Diver, Rock and Roll Hall of Famer Steve Winwood’s groundbreaking solo album, came on the heels of a series of successes that began when he, at age 15, joined the Spencer Davis Group.

With Traffic (inducted into the Hall of Fame in 2004) and Blind Faith, the 1969 supergroup Winwood formed with Eric Clapton and Ginger Baker, on his resume, he released Arc of a Diver in 1980 only to ride his momentum even higher – winning Record of the Year and Best Pop Vocal Performance (Male) at the Grammys in 1987 for “Higher Love.”

That’s a lot of momentum and one heck of an arc.

Cathie Wood, founder, CEO, and CIO of ARK Investment Management LLC and active manager of the company’s flagship ETF, ARK Innovation ETF (ARKK), had one heck of a momentum run, too (though not nearly as long-lived as Winwood’s career). ARK Invest and the ETFs saw amazing peaks in recent years. And though Wood was named Best Stock Picker of 2020 by the Bloomberg News editor-in-chief, ARKK’s performance, in only 15 months, dove into an abyss it may ever rise from again.

Here’s how Cathie Wood, ARK Invest, and the once high-flying ARKK ETF rose to fame – and what laws of physics (and investing) they got wrong.

Ark Investments launched its ETFs in 2014. Their flagship, ARK Innovation ETF (ARKK), an actively-managed fund chock full of disruptor tech companies, jumped from trading flatly around $20 a share between 2014 and early-2017 to an average of around $45 a share from mid-2017 through January 2020.

But that fall from grace was short-lived. With some active maneuvering by Ms. Wood into the same hot tech companies starting to take off as millions of new retail stock plungers chased them higher from chat rooms, Reddit forums, and their at-home computers and smartphones, ARKK started climbing quickly.

That run from the fund’s COVID bottom was a staggering 320% gain in only 12 months. 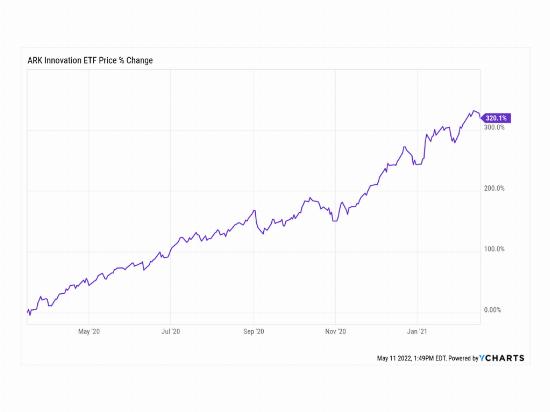 It was also the high dive platform ARKK would fall from just as quickly.

The ride up was momentum-fueled, with several boosters contributing to the lofty run. Equities were getting top billing in most media outlets, second, of course, to COVID horror stories. News of plunging markets coincided with stimulus talk and checks and dyed in the wool buy-the-dip impulses. The buying came from newly minted retail plungers sensing an easy opportunity to jump in with the Fed jamming its easy money accelerator to the floor and driving interest rates instantly into negative territory.

Easy pickings came courtesy of the attention being paid to everyone’s health, work-from-home, and lockdowns, and which companies would quickly and easily facilitate those instant trends.

Some of those darlings were: Roku, Teladoc, Square, Zoom Communications, Shopify, and Coinbase (where new retail punters and already hooked crypto-crazies traded coins that were garnering momentum of their own). Not uncoincidentally, these stocks, in the order given here, are among ARKK’s top 10 holdings, then and now.

The more money that flowed into ARKK, the more the prices of the underlying shares in ARKK’s holdings appreciated. One momentum driver was ARKK’s buying all the underlying shares of all the companies in its portfolio, as it created more units for the buyers of its ETF shares. Their big volume buying of underlying portfolio stocks drove prices higher, which drove the value of ARKK higher, which brought in more ARKK ETF buyers, which required more purchases of underlying stocks, which drove ARKK higher and garnered it more media attention; which drew in more buyers of the skyrocketing ETF, resulting is an easy to understand wash, rinse, repeat positive feedback loop.

There was “reflexivity,” a derivative of momentum. Reflexivity is hedge fund billionaire George Soros’ conceptualization that investors’ perceptions about reality impact reality itself through feedback loops, or self-fulfilling prophecies.

As ARKK rose and garnered media and investor attention, millions of other investors reflexively wanted to participate in that success. They feared missing out and bought the same high-flying stocks that made up ARKK’s top holdings, which drove up prices, in another wash, rinse, repeat cycle.

Most importantly, underlying all the buying momentum was upward valuation momentum.

What narrative-based traders and investors didn’t see, that fundamental and modelling investors and institutions saw was the Fed hammering rates into negative territory, with real rates plumbing new lows. It’s those rates that are incorporated into discounted cash flow models used to value “growth” stocks.

As the discount rate, the real yield on the 10-year risk-free Treasury note, shrunk, the cost of capital (what’s usually calculated as the weighted average cost of capital) for growing companies, especially those with no profits or losses, became theoretically cheap, as in next to nothing, and as that same discount input into DCF models shrank, the present value of future earnings and cash flows looked cheap. That justified professionals chasing up all those undervalued growth stocks too.

Even as price-earnings multiples (PE) expanded to what would otherwise look like crazy levels, investors conceptualized a new narrative, that higher PEs were a sign smart investors were willing to pay up for better earnings ahead.

And then, reality hit.

Zero-interest rates, massive Fed liquidity pumping, and trillions in “stimmy” checks, not to mention a growing wealth effect from the stock market soaring, supported buying of almost everything – everything that was in short supply. Shortages, of course, due to lockdowns, production ceasing everywhere, and innumerable supply chain chinks, meant sellers of whatever was available could and would raise prices.

Then seemingly out of nowhere the inflation bear, hibernating for 40 years, suddenly woke up.

What the Fed thought was a transitory phenomenon due to pesky supply chain issues is now recognized as deeply embedded inflationary expectations, that they believe can only be cut to the quick, or back to the 2% inflation rate the Fed’s been trying to engineer since the Financial crisis and Great Recession, by raising rates and quantitative tightening enough to dampen demand to some point just shy of a recession, or the jumping off point known as a soft landing.

Rising rates, first and foremost, are hammering growth stocks as the discount rate in DCF models soars, and the rising cost of capital is expected to kill growth prospects for growth companies that don’t have sufficient earnings to be of interest and don’t have profits or cash flow to meet rising debt service. Those companies’ stocks are being discounted into correction and bear market territory with a vengeance.

And all those positive momentum catalysts aren’t just gone, they’ve turned completely around and are driving negative feedback loops, and selling is begetting more selling. Worse, as selling momentum picks up, another negative catalyst will start weighing on sellers and margin calls.

What goes up must come down. It’s true in physics and true when positive momentum based on low to negative real rates is flipped on its head by rising rates.

That’s what pushed ARKK and growth stocks off the high diving platform they reached and into the abyss they now face, an abyss from which Cathie Wood finds herself falling deeper into as she adds to the losing positions her ARK Invest funds are holding onto for dear life.

Just because ARKK is down more than 75% from the mountain it scaled doesn’t mean it’s a buy.

The bloodletting won’t be done until the Fed raises rates enough to tank markets. Then ARKK will hit much lower lows, and so will all the great companies with real growth prospects already on sale.

So, stay tuned to Total Wealth, because I’ll tell you what to look for to know the bottom’s in, and what to buy on the way there.

2 replies on “The ARKK of a Diver: The Rise and Fall of Cathie Wood and ARK Innovation ETF”