I can guarantee only a tiny sliver of investors read that dead-on story from the Financial Times this week about what the markets – meaning investors – are ignoring.

Those folks are missing out.

Because they’ll undoubtedly miss an incredible opportunity to profit in a market virtually no one knows how to make money in.

This is the opportunity I’m talking about today.

What we’re mainly spotlighting here is inflation. But not directly. I’m talking about the way that the Federal Reserve is fighting inflation – by raising interest rates.

I’m sure you’ve read countless stories and seen numerous videos or shows on the topic.

Like when Netflix Inc. (NFLX) fell 75% from last November to May – knocking off $225 billion off its market cap – and investors could’ve doubled or tripled their money three or four times during that period.

That’s what I’m going to talk to you about today.

Let’s take a look at the fed fund rate – what everyone refers to as “interest rates” – over time. 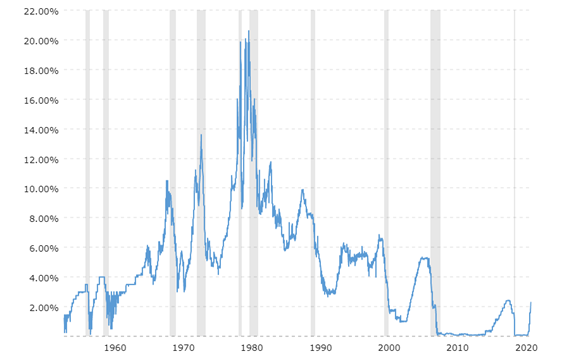 Now, don’t worry about the “why” of these peaks. What I want you to focus on is the time right before 2010 – right in the middle of the Great Recession created by the global financial crisis.

If a company wants to raise money in the bond market, which is how companies raise a significant amount of their capital (the U.S. bond market is worth around $46 trillion, the stock markets are worth around $44 trillion), they issue debt.

It’s like a credit card that they’ll eventually need to pay back.

And when interest rates are low, they’ll have low payments to give back to their creditors. Borrow a $1 million, pay back $1.03 million over 10 years. That’s a pretty sweet deal!

So sweet, in fact, that a company could issue more and more debt, and try and grow business by funding ventures probably don’t have any business venturing.

That’s just what they did.

It became the Era of Irresponsibility, all because the money was so easy to get.

All you needed was the proof that your business was working a little and the hope that it could work a lot. And the money was yours.

During the time of the zero-interest rate environment in the chart above, from March 2009 to the start of this year, the S&P rose 548%. Other major indices tell a similar story.

It was a bonanza. The biggest bull market in history. Maybe you made some money going long.

One of the best examples of companies that got by with low profit margins and increasing debt is Netflix. They built a business model revolutionary for the time, but now they’re in trouble with competition from Disney+, Apple TV, HBO Max, and others, all while interest rates are rising.

Take a look at the effects – the stock chart: 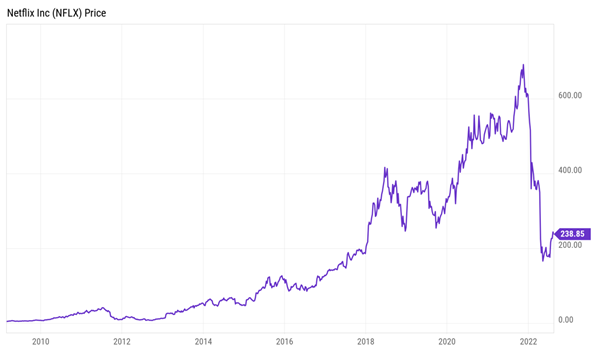 Their profit margin during that entire period never rose above 18%…

And take a look at all the debt they were issuing during that time. 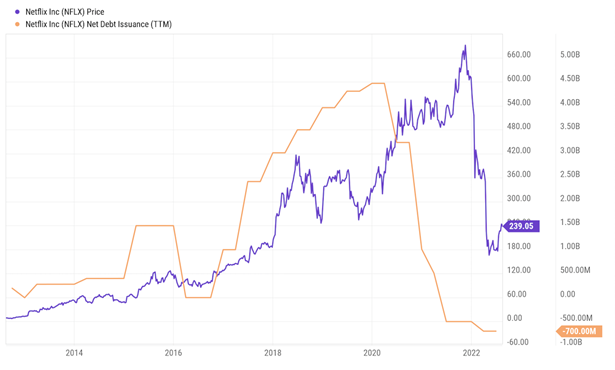 A company whose stock grew over 13,000% during that bull market couldn’t profit over a fifth of what they were selling. And they were issuing billions of dollars of debt every quarter to cover for their measly margin.

In a word, it was overvalued. Propped up. Destined to fall when rates started rising.

And Netflix is just a single company among dozens – and, quite honestly, it’s probably one of the best of the “bad.”

The smaller companies are much worse…

Freeloaders that need to borrow money to keep the doors open.

Leeches whose reckless behavior sucks the life out of unsuspecting investors.

Over the coming months, companies will fall. Some will fail, even. Like Mr. Buffett says, only when the tide goes out do you discover who’s been swimming naked.

The first step? Get rid of the deadbeats from your portfolio. They aren’t worth it. High debt, low margins, no products, lackluster management – all things to look out for.

The second step? Profit from them on the way down.

I’ll be back later today with exactly how to do that. It’s a simple strategy you can implement immediately to double, triple, even possibly quadruple your money, over and over again, on these types of companies.

Stay with me and keep an eye on your inbox.